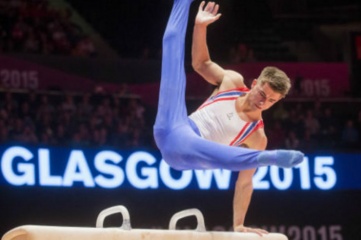 60 per cent of ticket holders came from outside Scotland

The 2015 FIG World Gymnastics Championships, hosted by Glasgow, received the award for Sports Event of the Year, one of several awards issued at the International Sports Awards 2016 in Geneva.

The 2015 FIG World Gymnastics Championships had already been hailed as superlative by the most influential figures in world sport. In his keynote address at Host City 2016 in Glasgow in November, WADA President and IOC member Sir Craig Reedie CBE – who was himself the recipient of the “Lifetime Achievement” award – described it as “the best presentation of indoor sports that I have ever seen”.

FIG President Bruno Grandi described the event, which sold more than 55,000 tickets, 60 per cent of which were sold outside Scotland, as “even better than the Olympic Games”.

Not only was the Championships one of the largest single-sport events ever to be hosted in the UK, with a record 594 gymnasts from 87 nations travelling to Glasgow to compete, but it also provided a number of historic moments for gymnasts including record All-Around titles for both Japan’s Kohei Uchimura and USA’s Simone Biles.

Councillor Archie Graham OBE, Depute Leader of Glasgow City Council and Chair of Glasgow Life, said: “To win the International Sporting Award for Sports Event of the Year only reinforces what we’ve known all along – that the 2015 World Gymnastics Championships truly was one of the best sporting events Glasgow has ever seen.

“Bringing more than 50,000 spectators and a massive £4.9million economic benefit to our city, it’s safe to say the event was one of a kind and more than worthy of the many rewards it has received to date!

“Here in Glasgow we’re still feeling the benefits of the 2015 World Championships, with participation in our gymnastics classes and programmes significantly increasing since the event – showing that major sporting events really do deliver lasting legacy benefits for the local community.”

Paul Bush OBE, VisitScotland’s Director of Events, said: “The World Gymnastics Championships was supported through EventScotland’s International Programme and is without doubt one of the most successful events that Scotland has ever seen.

“Not only did the event promote Scotland as the perfect stage for events to a worldwide audience through widespread broadcast and media coverage, it raised the bar in terms of the championships’ delivery, speaking to Scotland’s ever-strengthening capacity as an elite host of major events.

“I am delighted the event now has the International Sports Awards Sports Event of the Year to add to a growing list of accolades and would like to congratulate all partners on their outstanding contribution to the historic success of the event.”

Jane Allen, CEO of British Gymnastics, said: “The 2015 World Gymnastics Championships, held in Glasgow’s SSE Hydro, was a historically successful event for British Gymnastics and for the sport as a whole. It is also a breath-taking example of an excellent world-class event that was so successfully held in Scotland, with the help of many, including the FIG, UK Sport, Glasgow City Council, through Glasgow Life, and EventScotland.

Simon Morton, Chief Operating Officer at UK Sport, said: “The 2015 World Gymnastics Championships in Glasgow was genuinely a pioneering event that set new benchmarks in the way this inspiring sport is showcased.

“Its success demonstrated the enduring power of hosting big sporting events in the UK, with packed crowds, outstanding British athletes, many of whom went on to make the nation proud at Rio 2016, and an incredible economic impact."