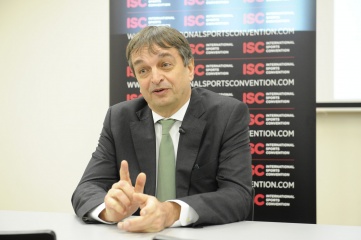 The battle for the presidency of FIFA is being fought out in the media, with French candidate Jerome Champagne surmising to the BBC that Prince Ali has been pushed into the race

Jerome Champagne has publicly attacked speculation that the emergence of Prince Ali Bin Al Hussein as a third candidate for the presidency of FIFA has cast him as the outsider.

Asked by UK national sports channel BBC Radio 5 Live if he would withdraw in the light of Prince Ali stepping forwards as a candidate, Champagne said "Of course not, I'm the only candidate to present a detailed programme."

Throwing down the gauntlet to Prince Ali, Champagne said "We need to know what is his programme, beyond thundering slogans without any concrete explanations.

"I've been a candidate for a year now, I've a concrete platform, I've exposed everything, it's a question for him: Why is he running? Who has pushed him? What is his ambition?”

Champagne’s reference to being “pushed” could be a reference to Prince Ali’s remark that his decision to stand was the result of discussions with “respected FIFA colleagues”.

Prince Ali only announced his intention on Monday, with a statement that his campaign would be positive, based around steering FIFA away from the administrative controversies that have dogged it for recent years.

The interview demonstrated that Champagne clearly does not plan to run a positive campaign.

“Last year he lost the election in Asia, so if you don't have a base in your own region and own continent how can you be expected to be elected at the world level?"

It remains to be seen whether such antagonistic remarks will prompt Ali to adopt a more negative stance and directly address the causes of the controversy of which he speaks – a tactic that could well be divisive within FIFA’s membership, where support for the incumbent president Sepp Blatter is said to remain strong.

HOST CITY asked for a comment on the leadership race from a FIFA spokesperson, who stated that they would welcome applications from nominated candidates until the 29th January.

Champagne, recognising that this is a public media campaign as much as internal FIFA election, has also spoken to Sky, saying "We want a fair democratic debate so we need more than one candidate and I hope more candidates will surface.

"I have always been an advocate of a pyramid in football that should be based on democratic principles with more than one candidate."

President Sepp Blatter has also welcomed the fact that other candidates are joining the bid for presidency, saying that it is in line with FIFA's spirit of democracy and discussion.

In an interview with Swiss newspaper Le Matin, Blatter said of Prince Ali stepping forward: "I can only rejoice in this nomination. We are a democracy, and this can only be beneficial for debate.

"And do not they say that win without peril is to triumph without glory?"