Home
»
News
»
Event excellence, from PyeongChang to the Gold Coast 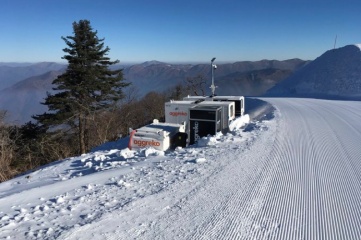 How did Aggreko power both the 2018 Winter Olympics in Pyeongchang and the 2018 Commonwealth Games in such a short space of time, not to mention providing temperature control in two wildly contrasting climates?

It seems like an impossible task, but Aggreko’s event services teams are specialists in mobile and modular power, heating, cooling and energy services for good reason.

The Winter Olympics and Paralympic Games of 2018 took place in average temperatures of -4oC. Power totalling 140 MW was provided using Aggreko’s containerised generators as well as around 985km of cabling – 100 times taller than the height of Everest. This was sufficient to power 20 venues, overseen by 95 of Aggreko’s experts on site to ensure a smooth project.

Both occasions were enjoyed by millions. Spectators packed the stands at both locations, enthralled by the thrills and spills of sporting competition. Behind the scenes, Aggreko were hard at work, optimising output, making sure that every variable was monitored and performing to its maximum.

To get to this point involved months of planning and design. The respective sites shared no common ground, and the teams responsible for constructing a plan had to consider plenty before finalising a directive for action.

During the Gold Coast Games there was much more space to cover than in Pyeongchang, but in Pyeongchang, the average temperature and ice-cold mountain winds would require special preparations for equipment to face this extreme climate.

Aggreko works closely with organising committees and this collaboration helps to highlight pre-existing systems, the functionality of the local grid and various solutions that can work around these potential pitfalls. This forms a partnership rather than a conventional business setup, where trust is created, and the supplier can get the best idea of exactly what is needed.

Each project is different and with Aggreko’s extensive experience in this sector, they have the expertise – and the modular products – to mould their specialist solutions to perfectly fit the varying requirements.

This is how Aggreko overcame the odds to offer these global events the reliability they craved, ensuring that its reputation for excellence in the field of events is maintained and warranted.