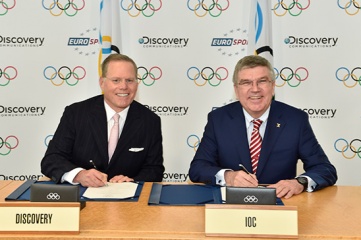 Discovery has acquired the broadcasting rights to 2018 to 2024 Olympic Games in Europe across all platforms including TV, online and mobile

In a historic deal valued at EUR 1.3bn, Discovery, the owner of Eurosport, has been awarded the rights to broadcast the Olympic Games from 2018 to 2024 across all media platforms in all European countries, excluding Russia.

The rights, which were issued after a competitive tender process, extend to the development of the IOC’s planned Olympic TV Channel.

“This is a historic partnership, innovative and ground-breaking on a number of fronts,” David Zaslav, president and CEO of Discovery Communications told journalists in a press conference.

“We can reach more than 700m people across Europe. This agreement will bring the Olympic Games to more viewers on more screens than ever before.”

According to IOC President Thomas Bach, a major deal-breaker was the broadcaster’s ability to reach young people via digital platforms.

“It is the first time one single media company has acquired all the rights across Europe,” said president Bach.

“This agreement concerns all the different platforms, so Discovery is the real gatekeeper for all these rights.

“This agreement allows us, in a very special and particular way, to address youth on the platforms they use. We can reach out to them directly through these platforms.

“It will go from the telephones, over digital channels and many more. This is what made it very attractive for the IOC.”

Discovery is confident it will recoup the heavy price tag over time.

“This investment is consistent with our prudent approach to investing in content,” said Zaslav.

“The EUR 1.3bn purchase price, to be phased in over time, will include the rights to four Olympic Games across all platforms, including the Olympic archives, and aligns with our strategy of acquiring world class IP to the Discovery Company.

“And over the term of the contract, we expect the Olympic Games to be cash flow positive.”

The deal gives Discovery the exclusive rights to broadcast the most popular entertainment property in the world.

“There is no more exciting property than the Olympic Games,” said Zaslav.

“The live, must-have and universal appeal of the Olympic Games make it unique and singular as a programming event.

“The global reach, the fan engagement, the thrilling stories, the volume of content, the integrity of the brand – there is no rival in sheer global or mass appeal.

“Our ability to develop and follow the same characters and athletes all year, combined with access and rights to the Olympic archives, makes possible for the first time a programming strategy that can burn the Olympic flame with stories and content 365 days a year.”

The agreement includes cooperation on the IOC’s Olympic Channel, which is planned as part of the IOC’s “Olympic Agenda 2020” process of reform.

“We are very happy that as part of the agreement we will cooperate with regard to the Olympic channel, which will be another tool to reach out to youth and to keep the awareness about Olympic sport and the Olympic values high throughout the year,” said Bach.

A launch date has not yet been set for the Olympic Channel. Timo Lumme, Managing Director, IOC Television and Marketing Services said, “This is not about speed, it is about quality and therefore we have not given a deadline for the start of the Olympic Channel.

“But today, this another milestone in the development of the Olympic channel, because with this agreement we can look forward to having the Olympic channel extended to other platforms and having a roll-out to ensure the whole continent.”

Eurosport already has agreements in place with many Olympic sports federations.

“As we look at the assets that we have, we have a real advantage as we sit down with the IOC to build the Olympic Channel,” said Zaslav.

“Almost half of what’s on Eurosport are Olympic sports that we have rights to for the next several years already.”

“The flexibility to sublicense rights across territories will open up strategic partnership opportunities with a wide range of broadcasters and distributors on how best to exploit these and bring more coverage to more people on more platforms throughout the European continent,” said Zaslav.

This aspect of the deal is somewhat controversial as it introduces a middleman between the IOC and domestic broadcasters, who are seen to have played a crucial role in extending the reach of the Olympic Games.

“Of course they [European national broadcasters] have played a significant role in spreading and broadcasting the Games,” said Bach.

“But Eurosport has also contributed to this in the past, so it is not the public broadcasters alone.”

The domestic broadcasters in Great Britain and France will retain the rights they have already been allocated to broadcast the 2018 and 2020 Games.

“In Great Britain, you have the situation that the BBC has the rights for 2020 so there is ample time before 2022 and 2024 to have discussions with Discovery about their cooperation,” said Bach.

“So this is not excluding anybody, but it is showing a new and broader approach to Olympic broadcasting by incorporating the Olympic Channel in a very intelligent and effective way and by offering the great experience of Discovery and Eurosport to work on their multiple platforms.”

Juan Antonio Samaranch, IOC Executive Board Member and delegate IOC Member for European broadcast rights said: “Discovery and Eurosport will ensure the exposure of the Olympic Games through their own TV channels and media platforms, and, where relevant, by reaching sublicensing partnerships with other broadcasters in the various territories.”