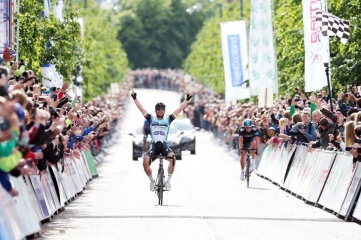 What does the 2018 European Championships bring for the future of multisports events in Europe? Host City reports

A new fixture has appeared on the calendar of international multi-sports events. The European Championships, taking place for the first time on 1-12 August 2018, has been described by observers as either a repackaging of existing championships or a serious challenger to the European Games – the continental mega event initiated by the European Olympic Committees (EOC) at Baku in 2015.

The organisers themselves describe the event as a “coming together of existing championships”. Six sports – aquatics, cycling, golf, gymnastics, rowing and triathlon – will be hosted in Glasgow, with athletics taking place in Berlin from 7-12 August.

The broadcast partners for the event are the European Broadcasting Union (EBU)’s free to air members.
“We were very happy to see that Glasgow and Berlin were supporting the idea and particularly that the federations took this major step forward to agree to this concept of having their European championships under one umbrella in the two cities,” says Stefan Kürten, Director of Eurovision Services & Sports Rights at the EBU.

Elevating sports together
“For us, this is a milestone in the development of sports in Europe. This concept will clearly contribute to maintaining European sports on this level where it belongs,” says Kürten.
“We want the public in Europe to focus on the top Olympic sports in Europe. We want to show to the public the top athletes in these sports that are already visible on free to air, and we want to centralise that.

“By centralising them we are not creating an additional event; it is bundling existing events. We as broadcasters are not interested in more events. There is sometimes the belief that the more you create, the more interest you generate. I can say from a broadcaster’s perspective this is wrong. You have to focus on the top events and make them even more valuable.

“Therefore we think there will be an increase in audience by these multi-sports events so that will be to the benefit of the sports and of the host cities and clearly also to our benefit.

“On top of that, we think by putting these events together we also want to emphasise the relevance and importance of European sports, because the cradle of the Olympic sports is Europe and we are afraid that if that part falls, gets weaker, that has an impact on world sports and we don’t want that. We think as broadcasters: let’s promote the strongest, push it further, and be creative and innovative.

“The message that we got back from the members was that the broadcasters were extremely pleased with such a milestone event. We have 23 broadcasters with us already – the top broadcasters – and they will be all the main channels.”

Frank Kowalski, Managing Director of the Berlin 2018 local organising committee says: “Working together with Glasgow, we are really proud to be in the first move of this European project.

“For the city and for us it wasn’t easy because the situation came after awarding the 2018 European Athletics championships to Berlin. But we are totally convinced that this is the right step for the summer sports to get the power against other sports like football.
“We all have to learn not to produce what we like to produce, but what our clients like to have. I am convinced that we will have a lot of synergies and will take every opportunity we have for us, for the European Athletics Championships and for the city of Berlin. We have strong partners and we are getting closer and closer through the collaboration – and it makes sense.”

Scheduling around the crown jewels
“In athletics it’s very important that our time schedule is respected,” says European Athletics President Svein Arne Hansen. “We have a long tradition in having our biennial Championships in this week and we made very sure from the beginning that our prime time had to be protected. We agreed that with LEN and with our Glasgow friends.

“This is the jewel in the crown for European Athletics and we have to protect that jewel and I think we have achieved this – we’ll soon be ready to give out the timetable.”

Paolo Barelli, President of LEN says: “What we are doing is very easy, it is not so complicated. The first period, the first part of the Championships, is for aquatics. The second part is for track and field, with one day of overlapping.”

“It is a coordinated approach,” says Kürten. “The idea is to have as few overlaps as possible but to have a natural flow of medal ceremonies and heats so we have on-going interest that is well coordinated.”

Colin Hartley, Championships Director of Glasgow 2018 says: “The collaboration to create a schedule that works for as many reasons as possible is already at version one. When we unveil that schedule it will be as good as we can achieve in terms of city, sport and of course for the broadcast viewers.”

The challenge of selling tickets
Tickets go on sale on 22 August 2016 – the day after the Rio 2016 Olympic Games finishes. Berlin has the biggest sales challenge, in filling the 74,475 seat Olympiastadion.

“For us it’s a very big task to fill the Olympic stadium in Berlin,” says Arne Hansen. “But I hope that all the excitement of what’s happening up in Glasgow will carry over to people in Berlin, so people will see next week we are in Berlin to see the athletics.

“We have gone into it with open eyes, even if this contract was signed before my election, which was one year ago. I am fully enthusiastic and behind it.

“We all remember Berlin 2009 and that incredible atmosphere. It was really something, because of one thing; you had the local athletes plus some superstars from Jamaica. But local athletes are what you need.

“I am sure that the German federation will bring the best out in this Championships. 74,000 is a very big thing to sell, but if somebody can do it in Europe, Berlin can do it. We hope that they will have bigger viewership and more people coming to the stadium than ever.”

In Glasgow, the organisers are looking into possibilities for ticketing across the different sports.

“On the back of the Commonwealth Games in Glasgow, the appetite for sports is very much there,” says Colin Hartley, Championships Director of Glasgow 2018.

“People going to sports they haven’t seen before is a proven thing that they are interested. So on the back of that, we will definitely bring ticketing together. And we’ll be promoting the events in Berlin as they will in Glasgow. For the spectators, online and social media will be very much a seamless experience.”

A threat to the European Games?
The next European Games is due to take place in 2019, with EOC President Patrick Hickey having stated in November 2015 that Russia would be the preferred host.

However, Russia’s Sports Minister Vitaly Mutko is reported to have said that Russia never applied to host the Games and would be too busy to host any other major events until 2020. And with Russia’s participation in athletics at the Rio 2016 Olympic Games under threat from doping revelations, the country’s suitability to host the European Games is also under scrutiny.

Hickey and EOC Vice President Janez Kocijancic both contacted Host City to say the EOC would not be making a statement on this matter “for the moment”.

Hickey also referred Host City to a letter he sent to the European Federations in which he stated that their contract with the European Championships management company would violate EU competition law, as it seeks to restrict them from "competing in another multi-sport continental event within a year of the conclusion of the 2018 European Sport Championships".

“I haven’t spoken with Patrick Hickey since the latest news about Russian internal things going on there,” said Arne Hansen at SportAccord. “We have an agreement with the EBU; our best athletes will be in Berlin. And if the conditions are right we will also be in the European Games.
“There will not be a European Athletics Championships of any kind in the European Games – no youth, junior, under 23, or senior. But I don’t say it will be low level. Athletics is a big sport; hopefully we can find other interesting things to put in the Games. I am not saying no to new competitions; that would be against my nature.”

It is also uncertain whether the EBU will put its weight behind the European Games. “We have had discussions, we have looked into it,” says Kürten. “It was difficult to follow the European Games on TV, there was not such broad interest in Europe. We think this is a bit of a different event, so for us it was clearly relevant to focus on the top sports.”

“What we are doing is putting together seven sports, with the help of EBU, with the help of the family, with the help of Glasgow, just to have something more to add to the value of each discipline. It was very difficult to create but when someone put their mind to this project is was easy to answer the question why. We think this is going to be a good format for the future.”

Big host city sought for 2022
No additional sports are being considered for the 2018 event, says Kürten. “We didn’t want to overcharge; the idea was to go with specific group of sports that couldn’t clash; it couldn’t be too long. If you have the first edition of such an event it’s good to start with quality and not to overload it.”

If 2018 is successful, the European Championships will take place again in 2022. Arne Hansen says: “We have, together with EBU, together with other partners, set criteria for 2018. I that is fulfilled, we will go along with 2022.”

European Athletics already has 11 countries bidding for their 2022 Championships, in a process that was launched before the possibility of the combined event arose.

“It is a huge thing that we already have 11 countries in Europe bidding for the 2022 European Athletics Championships. We will go out to them, together with the other sports, to find potential bidders from the 11,” says Arne Hansen. “We have already started a bidding process, so it would be very hard to go outside those 11 countries to find the next organiser for the next European Athletics Championships.”

Kürten says the aim is to award the 2022 European Championships to a major European city. “The interest when looking at host cities is clearly there; in this respect we expect this to materialise in a big city – that’s what we are trying to achieve.

Asked if the next edition will take place in just one city next time, Kürten said “It’s too early to say. That’s open; probably one city”.

This article is Host City's coverage of a European Championships media roundtable at SportAccord Convention, with further input from the EOC.