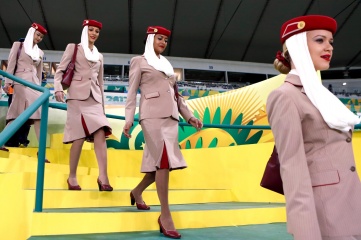 During a FIFA meeting in Zurich about potential timings of the 2022 World Cup, Emirates has confirmed that it will not renew its sponsorship

Just as a FIFA taskforce met in Zurich on Monday to review options for the timings of the 2022 World Cup, it emerged that Emirates airline would not be renewing its sponsorship contract with football’s international governing body.

“This decision was made following an evaluation of FIFA’s contract proposal which did not meet Emirates’ expectations,” Emirates said in a statement on Monday.

A FIFA spokesperson said Emirates had informed them two years ago that Brazil 2014 would be the last World Cup it would sponsor, as the airline was changing its strategy to focus on more frequent smaller events around the world instead of a mega-event every four years.

Qatar Airlines is said to be waiting in the wings to take over the role of official carrier for FIFA. Sony are also reported to be putting an end to their sponsorship, with Olympic TOP sponsors Samsung being mentioned as likely contenders to occupy this space.

Emirates chose to make the news public at a time when FIFA is tackling the tricky issue of how to host the World Cup in Qatar in 2022 without risking the health of players and fans, while also minimising disruption to national league fixtures.

“We are getting closer to narrowing the dates for the FIFA World Cup to two options – January/February 2022 or November/December 2022 – but FIFA has also been asked to consider May 2022,” said FIFA secretary general Jérôme Valcke.

Hosting the World Cup in January/February would almost certainly result in the event clashing with the 2022 Winter Olympic Games, for which Almaty and Beijing are currently candidate cities.

The May option was put forward by the European Club Association, who have proposed that the tournament could take place from April 28 to May 29 without disrupting domestic fixtures.

However, FIFA’s chief medical officer Professor Jiří Dvořák highlighted medical concerns relating to player safety and fan safety if the FIFA World Cup were to be held between May and September. Valcke also pointed out that the month-long period of Ramadan would begin on 2 April in 2022, which would impact on preparations for the tournament.

Hassan Al Thawadi, CEO of the local organising committee said the preferred scenario was for the World Cup to be held in the winter, while affirming that it remained fully committed to delivering what was promised in its bid and organising the best possible event whatever is decided.

The taskforce is due to hold its next meeting in early 2015 after further consultation.

“The objective of today’s meeting was to receive feedback from all parties and to work on narrowing the options,” said Sheikh Salman Bin Ebrahim Al Khalifa.