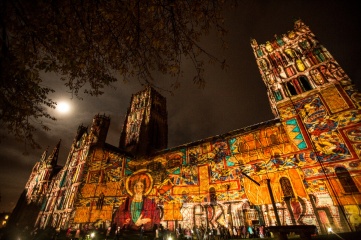 The best cathedral on Planet Earth, as Bill Bryson described it, illuminated during Lumiere

How Durham, a small city in the industrial north east of England, captured the world’s attention through hosting Artichoke’s Lumiere festival

When in 2008 the northern English county of Durham and its small historic city became a unitary council – the fifth biggest in England – it was golden opportunity to build a new events and tourism strategy for the region.

“One of the things that became obvious was the need to change the narrative, both regionally, nationally and internationally about Durham, which was seen as a former industrial area,” George Garlick, Chief Executive of Durham County Council, told HOST CITY.

Durham put in a bid to be the UK’s first City of Culture in 2013 – a bold move for a city of less than 40,000 people. In the end, the title was awarded to Derry~Londonderry, but Durham decided to press on with its ambitious programme of cultural events anyway as a way of attracting visitors to the region.

It was through this work that the possibility of hosting the Lumiere festival came about, a huge light festival owned by a small and innovative arts events company called Artichoke.

“It was one of those fortuitous things. Artichoke were planning a major festival of light elsewhere in the UK and that fell through, and they’d got backing from the European Commission and Sky Arts at that stage,” says Garlick.

“So it was a fairly fully developed proposition, and on hearing that we were raising the flag for major events here in Durham, they came to see us and we said ‘yes, that sounds great’. In 2009, pretty much at the drop of a hat, the first Lumiere festival was put on.”

Durham has hosted Lumiere every other year since then, with the city investing GB£400,000 in the event for 2011 and 2013. These sums have been matched by the Arts Council, with additional funding from the European Commission and a significant amount of private sponsorship and a major grant from VisitEngland.

Lumiere had a huge impact, with 175,000 visitors coming to see the light festival in 2013. National newspapers published double page spreads on the event and the international broadcaster BBC World ran a one minute clip of the show on its rolling news coverage for 24 hours.

“It’s a really interesting balance of something that’s working for the local population, but also being attractive to people visiting for the first time,” says Helen Marriage, director of Artichoke. “Just over half the visitors that we count through our evaluation come from the immediate city, 17 per cent from the wider region and the rest from outside.”

The increase in tourism over the period that Durham has been hosting Lumiere is impressive. “VisitEngland said we were one of the fastest growing tourism areas over the last three years – we are up 150 per cent in Durham itself and nearly 20 per cent across the county,” says Garlick.

“The increase in the visitor economy in each of the last three years means a huge increase in employment. It’s not just the people who are actually employed for the festival – the major change is the structural change in Durham as a tourism destination.

“The festival actually generates GB£5 million directly in restaurant sales, overnight stays and so on in the local economy. We’ve seen a lot more people coming from both Europe and in particular America.”

Lumiere is a very successful flagship event, but it’s not the only contributor to Durham’s success. 2013 was a particularly big year for the city.

“We had the Ashes test between England and Australia at riverside stadium, where England won the Ashes to baying and excited crowds, which was terrific. We had the Lindisfarne Gospels exhibition, which came up from the British Library – 100,000 people bought every ticket available for the three months that it was on. We had cycling events, a brass festival – but Lumiere is the jewel in the crown.”

The good news continued in 2014, with Durham County Council being named local council of the year. “It’s a city and county that really punches above its weight,” says Marriage.

“It’s tempting to think that it’s an impoverished area with a decline of traditional industry, but that’s not the impression you get when you are here. It’s a place on the up and people are making it work – and events are really part of that culture.”

Durham’s long term strategy is hinged around Lumiere, but another important cultural event is the fast-growing Durham Book Festival. “The world heritage site between the cathedral, the castle and the university has a number of display venues, so there’s a programme worked out in advance for that,” says Garlick.

In October 2015 the Rugby World Cup comes to St. James’ Park in Newcastle, just 15 minutes from Durham. “I would hope, as we’ve seen in many previous large events and when we saw the Olympics were on, we’ll see a lot of people visiting Durham,” says Garlick.

“Durham hotels traditionally pick up a lot of business from anything major that’s happening in Newcastle because it’s an attractive place to stay and a 15 minute train journey, so the Rugby World Cup will be really good for us.”

The next Lumiere festival takes place in November 2015. “We’ve recently agreed a package with the Arts Council, which will allow us to do it next year and in 2017,” says Garlick.

The city consulted with the local people and businesses before agreeing to host the event again. “The feedback has been overwhelmingly positive from the public, but particularly from businesses who think this is working really well in terms of hoisting Durham’s flag,” says Garlick.

“It’s a huge project that takes about 18 months to plan,” says Marriage. “So we are a year out and we are looking at all the logistics – traffic planning, crowd management, where the installations might go, technically what they might need.”

Helen Marriage was one of the speakers at HOST CITY Bid to Win conference on 28th October 2014, on a panel called “Bidding for the Right Event”, alongside the owner of a very different event, Peter Tindemans of Euroscience – which awards the EU City of Science.

“It was really fascinating to begin to think about what we do from the other end of the telescope,” says Marriage. “So hearing Peter Tindemans talk about the fact that he saw Euroscience as a property that he could get cities to bid for – that’s never the way we work, we are always trying to persuade people to let us do what we do.”

Lumiere also took place in Derry last year as part of the closing celebrations for the first UK City of Culture, and there are many other events that Artichoke produces. “We are working in London, Northern Ireland, we are looking at something in Wales. We are increasingly invited to do things internationally.

“But even if cities invite us, they don’t really get what it’s going to be like and all the compromises everyone is going to have to make. Very often an artist will say ‘I really want to make something here’, and we set about the process of persuading the authority that they want to fund it and that they can accommodate it. It’s always tough the first time you go into a place.”