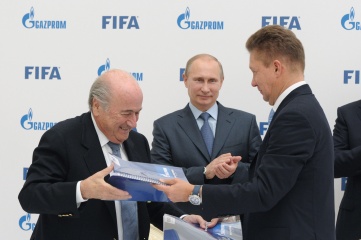 The 2014 FIFA World Cup in Brazil was successful on many fronts, but president Sepp Blatter chose to highlight a “message of togetherness” after handing the tournament over to the next hosts, while president Vladimir Putin of Russia chose to praise the social impact of the World Cup.

“FIFA’s World Cup in Brazil had a very special message to give – a message of togetherness and of connecting people, a message of peace and of anti-discrimination,” said Blatter after the ceremony at the Maracana Stadium on Sunday.

“We have enjoyed a successful World Cup and we will have a legacy in this country. At the same time there is a responsibility for the next host country and I’m confident that Russia will take on this responsibility and also give us a wonderful World Cup to remember in 2018.”

During the ceremony inside the Maracana Stadium Putin said, “I want to congratulate President Rousseff on how the World Cup was organised. Football helps to solve social problems.”

Putin’s decision to focus on the social benefits of hosting the World Cup is notable, given the major protests within Brazilian society that dogged the country as it prepared to host the tournament. Whether hosting the World Cup will act as a catalyst for change in attitudes towards sexuality in Russia remains to be seen.

“Our task is to create the best possible conditions for the coaches, players, experts and fans,” said Putin.

“I am grateful to President Blatter and his colleagues from FIFA for the honour to organise the World Cup. We will do all we can to organise the event on the highest level”.

Russia has its work cut out over the next four years. Seven new venues need to be built but construction is being held up by an auditing process, according to the Moscow Times.

Over the course of 2014 around US$ 23bn is supposed to be spent on large scale infrastructure projects, including the World Cup venues, but only 6 per cent of this had been spent by the start of June.

Russia will be able to take heart from Brazil’s broad hosting successes, despite the scramble to finish venues on time.

”Brazil is very proud for once again having staged the biggest football celebration in the world,” said Brazilian president Dilma Rousseff.

“In the last 30 days the world has been connected to Brazil, celebrating goals with a lot of emotion in the 12 host cities and making this the World Cup of World Cups. I am sure that everyone who came to Brazil, like tourists and delegations, will take back memories of our hospitality and joy, and we Brazilians also have unforgettable memories.

“I wish the Russian people great success in the organisation of the 2018 FIFA World Cup."

The first major milestone event for Russia 2018 will take place in July 2015 in Saint Petersburg when the qualifying pathway for FIFA’s member associations will be defined at the Preliminary Draw, FIFA said in a statment.