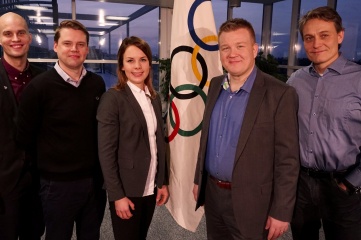 Atos, the Worldwide IT Partner of the Olympic Games since 1989, has signed a contract with the Finnish Olympic Committee (FOC) that includes IT services, sponsorship of local triathlete and joint marketing initiatives until 2018.

The Olympic Games is one of the world’s biggest IT-projects, its scope bringing special challenges to IT management systems and infrastructure. Atos has been a key technology provider for the Olympic Movement since 1989, when it provided services to the Barcelona 1992 Organising Committee, and is now delivering IT for the upcoming Rio 2016 and PyeongChang 2018 Olympic Games.

“It’s great to see how the international player Atos implements the IT during the Olympic Games in Rio. We will utilize this know-how also in Finland in our own IT-projects of the Finnish Olympic team,” said Ville Köngäs, Client Manager at the Finnish Olympic Committee.

“We pursue to reach a point where our own performance in IT-related issues will raise into a totally new level enabled by Atos.”

As part of the cooperation, audiences will be able to follow the sporting life and competition preparations of ITU Long Distance Triathlon World Championship silver-medalist Kaisa Lehtonen through social media channels. She will also participate in the upcoming Olympic events.

“It is great to be part of the cooperation with the Finnish Olympic Committee and Atos,” said Lehoten.

“Through the cooperation I can see from a vantage point the big role technology has also on our athletes’ work; and on the other hand let people follow my daily life as an athlete.

“The cooperation enables me to prepare determinedly to the upcoming competitions and helps me on my way to be part of the ultimate top of the world athletes.”

The Group works with clients across a number of other business sectors including defence, financial services, health, manufacturing, media, utilities, public sector, retail, telecommunications and transportation.

Harri Saikkonen, Managing Director of Atos in Finland said “It is fantastic to start a local cooperation with the Finnish Olympic Committee. Being successful in sports and business has many common elements. Gold-medal achievements and succeeding in international arenas requires from companies an unconditional work ethic, at the same level as top athletes when preparing for competitions.