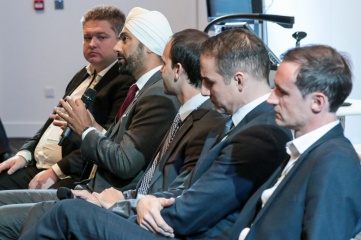 Speaking at Host City 2016 (L-R): Marc Webber of audioBoom; Kulveer Ranger of Atos; Itay Ingber of MatchVision; David Grevemberg OBE of the CGF; and Julien Ternisien of the EBU

Glasgow 2018 and Atos, which both recently participated in Host City 2016 conference in Glasgow, have signed the first sponsorship deal for the major sporting event in Glasgow

Atos, a leader in digital transformation, has been confirmed as the first Official Supporter of the Glasgow 2018 European Championships as a Timing, Scoring and Results (TSR) provider.

The announcement follows the highly successful participation of both Atos and Glasgow 2018 in Host City 2016 Conference and Exhibition in November. Glasgow 2018 exhibited at Host City 2016, while Kulveer Ranger, ‎Vice President Strategy & Communications at Atos UK & I spoke on a panel discussion alongside Julian Ternisien, Head of Sports Rights, European Broadcasting Union - the broadcast partner of the European Championships.

Glasgow 2018 is an exciting new multi-sport event that brings together some of Europe’s leading sporting competitions.

Excitement continues to build ahead of Glasgow 2018, which promises to be a new highlight on the global sporting calendar and will build on Scotland’s reputation for delivering world-class sporting and cultural events.

Starting in 2018, the European Championships will be staged every four years and will combine the existing European Championships of Athletics, Aquatics, Cycling, Gymnastics, Rowing and Triathlon with a new Golf team event. The first edition will be held in a unique sporting partnership between Host Cities Glasgow and Berlin.

Atos will provide the Timing, Scoring, Results and TV graphics service for Cycling, Golf, Gymnastics and Triathlon, as well as the TV graphics highlights package for all sports, providing a seamless viewing experience for a potential TV audience of over one billion across Europe.

Aileen Campbell MSP, Scottish Government Minister for Sport, said: “The 2018 European Championships provides Scotland with an exceptional opportunity to build on the success of hosting major events such as the Commonwealth Games and Ryder Cup over recent years. It will help us to further enhance our reputation as a world class venue for international sporting events.”

Councillor Archie Graham OBE, Depute Leader of Glasgow City Council, said: “Glasgow’s sporting reputation has never been higher thanks to our international sporting events programme. The European Championships will see us embark on the next stage of this proud sporting journey in partnership with Europe’s leading sports.

“Atos is a world leader when it comes to providing digital services for major sporting events and has shown time and time again that they can deliver on the global stage.

Their proven experience will put Glasgow 2018 in the best possible position to deliver a truly world-class event for athletes and spectators alike.”

Gavin Thomson, Senior Vice President, Scotland, Ireland and Wales, and Big Data and Security UK&I at Atos said: “We are confident that the Glasgow 2018 European Championships will be a great success. Atos was delighted to play a leading role in Glasgow 2014 - an event seen as one of the best Commonwealth Games ever staged.”

Marta Sanfeliu Ribot, Chief Operating Officer, Major Events, Atos said: “We have delivered innovative IT solutions for the Olympic and Paralympic Games for more than 20 years and once again the digital transformation involved in bringing events like Glasgow 2018 to an increasingly sophisticated worldwide audience is a challenge we relish. Glasgow has an internationally acclaimed reputation for hosting major sporting events and this is another key opportunity to showcase the city, the athletes and the support sponsors involved.”

Scottish Triathlete Marc Austin, who staged a memorable performance at Strathclyde Country Park, during the 2014 Commonwealth Games said: “It is fantastic to see a world-renowned brand like Atos lend their name to the Glasgow 2018 European Championships and it confirms how highly regarded this event will be.

“The feeling of competing in front of a home crowd at the Commonwealth Games is something that will live with me forever and I’ll be working hard to gain that experience again at 2018. The addition of the Triathlon Age Group Championships will create a real carnival atmosphere at Strathclyde Country Park and everyone in the Triathlon community is looking forward to it.”

The event will build on Glasgow and Scotland’s track record of hosting major international events including the 2014 Commonwealth Games, 2014 Ryder Cup and 2015 World Gymnastics Championships.

About the 2018 European Championships

1. The 2018 European Championships will be staged by the European Federations and the Host Cities of Glasgow and Berlin.

3. The European Broadcasting Union (EBU), the umbrella body for Europe free-to-air channels, will be the broadcast partner for the Championships. There is a potential television audience of around 1.03 billion for the event with many more viewers across multiple digital platforms.

4. Around 3,000 athletes will travel to Scotland as part of a total delegation of around 8,500 including officials, media and others. A further 1,500 athletes will compete in Berlin.

6. Four European Cycling Championships will be staged in Glasgow and its metropolitan area. Track, Road, Mountain Bike and BMX will attract 650 of Europe’s top names to the Sir Chris Hoy Velodrome, the Cathkin Braes Mountain Bike Trails, the streets of Glasgow and a new world championship and Olympic standard BMX track to be built in the Knightswood area of the city.

9. The European Championships for both Rowing and Triathlon will both be staged at Strathclyde Country Park in North Lanarkshire.

10.Berlin's Olympic Stadium will be the venue for the European Athletics Championships with the road races and race walking events held throughout the city.

Atos SE (Societas Europaea) is a leader in digital transformation with circa 100,000 employees in 72 countries and pro forma annual revenue of circa EUR 12 billion. Serving a global client base, the Group is the European leader in Big Data, Cybersecurity, Digital Workplace and provides Cloud services, Infrastructure & Data Management, Business & Platform solutions, as well as transactional services through Worldline, the European leader in the payment industry.

Atos is the worldwide IT partner of the International Olympic Committee and International Paralympic Committee. The global company has provided IT solutions to the Olympic Games since 1992 and to the Paralympic Games since 2002. Atos was a crucial partner in the digital transformation of the Rio 2016 Olympic Games and played a key role in the delivery of the Games Management and Information Systems to the Glasgow 2014 Commonwealth Games.