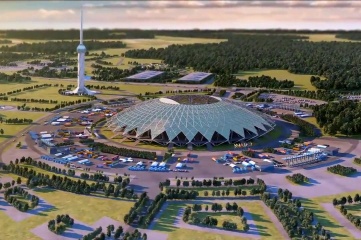 The Cosmos Arena in Samara is still under construction

Russia’s suitability to host major international sports events has been called into question by recent events, with the IOC having withdrawn its support for events in the country over evidence of organised doping. But the CEO of FIFA sponsor Adidas has given a positive appraisal of the benefits of staging the 2018 World Cup in Russia.

“Russia is a very sport enthusiastic population. A lot of sport activities happen here in Russia: we had the winter Olympics, we have the upcoming World Cup and Adidas is the brand which has been in longest connection with the Russian population, therefore there is a big opportunity for us which we want to grab,” Adidas Group CEO Herbert Hainer told state broadcaster RT on a recent visit to Moscow.

Adidas has Official Partner, Supplier and Licensee rights for the FIFA World Cup and all FIFA events until 2030. As well as partnering with FIFA, Adidas sponsors Russia’s national football team and Moscow teams CSKA and Lokomotiv.

“Football is the biggest sport in the world and the World Cup will enhance this. But I think there is a huge opportunity for all the different sports, Russia is great in track and field, ice hockey, gymnastics, and I definitely think that this will further continue," said Hainer.

Russia’s economy has been hit by the collapse in oil price, with GDP contracting -3.7 per cent in 2015, according to World Bank figures. The budget for staging the World Cup has correspondingly been reduced by 4.4 per cent to US$9.5 billion, of which private investment accounts for 32 per cent.

But Hainer, who was in Moscow for the opening of a new Russia and CIS Adidas headquarters, said the World Cup will give the country a lift.

“Of course there are some challenges at the moment in the economic development but this will be overcome and I think sport really will drive the whole mood in the country and the whole optimism of the people – therefore I am quite happy that the World Cup in 2018 is here in Russia.”

The 2018 FIFA World Cup takes place from 14 June to 15 July in the cities of Ekaterinburg, Kaliningrad, Kazan, Nizhny Novgorod, Moscow, Rostov-on-Don, Saint Petersburg, Samara, Saransk, Volgograd and Sochi. Adidas will be supplying the match balls, as it has done since 1970.