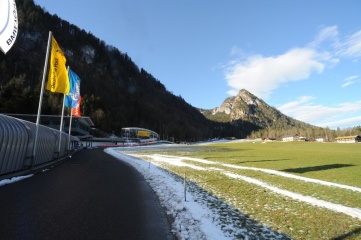 Königssee staged the third round of the 2015/2016 BMW IBSF Bobsleigh and Skeleton World Cup (Photo: IBSF)

The International Bobsleigh and Skeleton Federation (IBSF) has chosen an alternative to Sochi for hosting its 2017 World Championships.

The BMW IBSF Bobsleigh & Skeleton World Championships will now take place in Königssee, home to the oldest permanent bobsleigh, luge and skeleton track in the world, from 13 to 26 February 2017.

Critical factors taken into consideration when selecting the surrogate host were, according to an IBSF statement, “Minimal financial impact on teams regarding travel and organisation; Keep the dates and timing of the original schedule; Experience on the operational and logistic level to host a two-week event at such a short notice; Availability of the track during the two-week time period.”

And as Königssee hosted the IBSF World Cup in February 2016, it will not need to undergo an “international training period” usually required of the host race organiser.

The IBSF said it was “very impressed by the solidarity and commitment shown immediately by the IBSF Race Organisers to support this effort in any possible way.”

The decision to move the event from Sochi was made amid ongoing investigations into the integrity of sport in Russia.

“The IBSF Executive Committee felt that during this difficult time it is prudent not to organise such an event in Russia,” the IBSF said in a previous statement, issued a few days before announcing Königssee as the host.

The IBSF said it was moving the event out of Russia “to allow athletes and coaches from all nations to participate in a competition that focuses on sport rather than accusations and discussions – whether justified or not.”

It said “The Russian Bobsleigh Federation has put a great effort in the preparation of the World Championships, but the current climate would make it nearly impossible to appreciate the efforts of the Organising Committee to host a great event or the quality of the Sanki Sliding Centre as one of the best tracks in the world.”

The IBSF also “asked all members and athletes for fair play and respect, which also includes the assumption of innocence for any athlete, regardless of national affiliation, until proven guilty.”

The International Olympic Committee (IOC) Executive Board had in July asked all Winter Olympic Sports Federations to find alternative host nations for any upcoming events.

“Because of the detailed references to the manipulation of samples during the Olympic Winter Games Sochi 2014 the IOC asks all International Olympic Winter Sports Federations to freeze their preparations for major events in Russia, such as World Championships, World Cups or other major international competitions under their responsibility, and to actively look for alternative organisers,” the IOC said.

Adam Pengilly, IBSF Vice President International Affairs, was the only IOC member to raise his hand to vote for a blanket ban on the Russian national team competing in the Rio 2016 Olympic Games.

“I’m an athletes’ representative, so I don’t want innocent athletes to have a consequence that’s nothing to do with them,” he explained to delegates at Host City 2016 in Glasgow during the panel discussion “Has Sport Lost Its Integrity?” on November 21.

“But in a bigger picture of what’s right for the long term of clean sport and the Olympic movement – and to protect that 12 to 14 year old Russian athlete that would in previous system have been forced to take drugs at some point in their career – based on the information I had, I was of the view that there should have been ineligibility for the whole team.”

All other IOC members – close to 100 – voted in favour of passing on to international federations the responsibility of deciding whether to allow Russian athletes in their sports to compete at Rio 2016.

“I can certainly accept the idea to give international federations the opportunity to look at individual athletes, and find out which ones had been part of a robust anti-doping system outside of the Russian one – I thought that was a reasonable approach,” Pengilly said at Host City 2016.

“But when someone abuses the Olympic Games, which as a movement is held so dearly, it in the way that it was abused in Sochi there should be some sort of symbolic consequence. For me, that was that we let those athletes that we deemed to be clean to come in, but not allow the Russian flag to be flown.

“I was in the minority within the IOC. I had a lot of people come up to me afterwards, both fellow members and within the sporting movement, to say well done. Some said: well done, I don’t agree; others said I do agree – and I’m like, OK you could have put your hand up as well! We need to develop our systems so it’s OK to disagree.”

For Sochi, the loss of the IBSF World Championships will be another blow to the legacy of the 2014 Winter Olympic Games – already said to be the most expensive Games in history due to reports of expenditure of US$51bn on infrastructure.