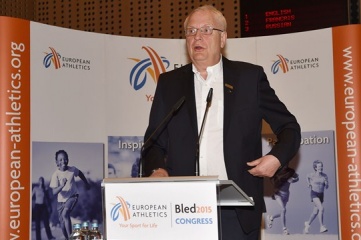 The IAAF awarded its flagship event, the 2021 World Championships, to the US city of Eugene on Wednesday in a surprise move that has provoked condemnation by the governing body of athletics in Europe.

The decision was made at a meeting of the IAAF Council in Beijing, bypassing the usual bidding procedure.

“Although this decision departs from the usual procedure, I am delighted that my Council colleagues understood the enormous opportunity presented to us to access a key market and have taken a decision in the interest of the global development of our sport,” said IAAF president Lamine Diack.

“In granting the championships to Eugene the IAAF Council have made a clear choice on a strategic decision that enables us to take advantage of a unique opportunity that may never arise again, whereby public authorities, the private sector, the national Olympic Committee, NBC and a particularly enthusiastic public are joining forces.”

The news was greeted with surprise and consternation by European Athletics.

“I would like to congratulate USA Track & Field and Vin Lananna, who has led Eugene’s bid, but I must say I am very surprised by the complete lack of process in the decision the IAAF has taken,” said Svein Arne Hansen, who was elected as president of European Athletics last week.

“The IAAF knew that Gothenburg was a serious candidate for the 2021 World Championships. Swedish Athletics and the city had put in a lot of effort over the years to prepare the bidding application but they have not even been given the chance to bid for the event.

“I have already spoken to Swedish Athletics Federation President Björn Eriksson and he is deeply disappointed about what has happened.

“I completely understand the disappointment of Björn and Göteborg & Co. CEO Camilla Nyman. I know that 2021 was the most important year for the city because it is when they will celebrate their 400th anniversary.

“This type of decision would just not happen within European Athletics as we have a comprehensive bidding process that all candidates must follow.”

Eugene bid for the 2019 Championships and lost out to Doha by just 15 votes to 12 votes, after Doha reportedly promised to raise $37 million for the IAAF from broadcasting and merchandise revenues.

With 2021 going to the USA, this will be the first time a World Championships will be held outside of Europe for two consecutive editions.

“This is, of course, not good for the development of our sport on the continent. European Athletics expects the World Championships to come back to Europe in 2023,” said Hansen.