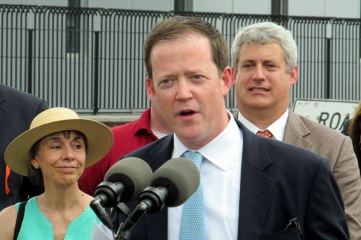 Richard Davey at the opening of Assembly station in the Boston suburb of Somerville in September 2014 (Photo: Wikimedia Commons, user Pi.1415926535)

He succeeds Dan O’Connell, who successfully led the group that was selected as the US Olympic Committee (USOC)’s contender for the 2024 Olympic Games, against competition from Los Angeles, San Francisco and Washington D.C.

“This is a terrific opportunity to build upon all the great work and planning that has already been done,” Davey said in a statement.

“But in many ways this is just the beginning. Over the next year we will be in every community in Boston —and in every region of the state—to get the thoughts and input of the public on what a 2024 Games would look like and the kind of legacy it could and should leave for Massachusetts.”

Davey was appointed Transportation Secretary of Massachusetts Department of Transport (MassDOT) in 2011, a position he held until stepping down in October 2014.

The effectiveness of the city’s transport system was a central component of Boston 2024’s submission to the USOC, which highlighted the fact that most venues are within walking distance of public transport.

Dan O’Connell, the outgoing leader of Boston 2024 who previously served as Housing and Economic Development Secretary for Massachusetts, will remain on the bid’s executive committee.

“Dan O’Connell was integral in making the case over the last year that Boston could host a Games that was sustainable, cost-effective, and that would leave a lasting legacy for Boston and Massachusetts,” said John Fish, chairman of Boston 2024 in a statement.