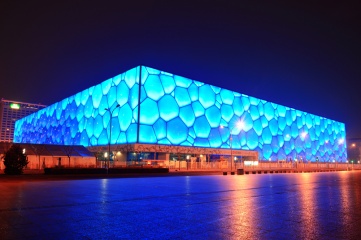 The "Water Cube", which hosted Aquatics in 2008, will become the "Ice Cube" for skating events in 2022 (Songquan Deng / Shutterstock.com)

Olympic Agenda 2020’s sustainability reforms helped Beijing to produce a winning bid, according to the IOC

The Beijing 2022 bid committee has promised to keep costs down on being elected as the host city of the 2022 Winter Olympic and Paralympic Games at the 128th IOC session in Kuala Lumpur on Friday, with the International Olympic Committee citing manageable infrastructure costs as a key factor in the success of the bid.

“Just as with the Beijing 2008 Summer Games, the Olympic Family has put its faith in Beijing again to deliver the athlete-centred, sustainable and economical Games we have promised,” the newly elected host of the 2022 Olympic Games said in a statement issued to the press.

Existing venues, such as the iconic Bird’s Nest stadium built for the Games in 2008, will feature in the Games. US$1.5bn will be spent on Olympic villages, sports venues and other infrastructure, a sum that is “significantly less than for Olympic Games in the past”, according to the IOC.

“Olympic Agenda 2020 calls for a stronger focus on sustainability, legacy, and transparency, while making it easier for host cities to tailor Games that meet their needs rather than trying to fit a template,” the IOC said in a statement issued after the election.

“Beijing took advantage of the flexibility provided by Olympic Agenda 2020 to improve its plans for the Games and reduce costs.”

Despite being widely viewed as the runaway favourite, Beijing won the vote narrowly with just 44 to Almaty’s 40. Only 84 of the 100 International Olympic Committee members participated in a vote that had to be recast after technical difficulties.

The Beijing 2022 Winter Games will immediately follow the 2018 edition in PyeongChang, South Korea. Developing winter sports further in the Asian market promises to be a valuable effect of hosting the Games in Beijing.

“Beijing aims to use the Games to accelerate the development of a new sport, culture and tourism area, and to encourage interest in winter sports in a region that is home to more than 300 million people in northern China,” the IOC said.

The Beijing 2022 bid committee said “This will be a memorable event at the foot of the Great Wall for the whole Olympic Family, the athletes and the spectators that will further enhance the tremendous potential to grow winter sports in our country, in Asia and around the world.”

Beijing will be the first city to host both a summer and winter edition of the Olympic Games – facilitated in part by hosting many skiing events at Zhangjiakou, 220km away from Beijing. Artificial snow is also likely to play a role in enabling the competitions to take place.

The host city contract signed by Beijing representatives and IOC president Thomas Bach has been made public for the first time.

Meanwhile, the “Olympic capital” city of Lausanne was elected as the host of the 2020 Winter Youth Olympic Games at the IOC Session, garnering 71 votes to Brasov’s 10.

The IOC Evaluation Commission singled out Lausanne for its good use of existing, temporary and demountable venues, which is in line with Olympic Agenda 2020 sustainability reforms.