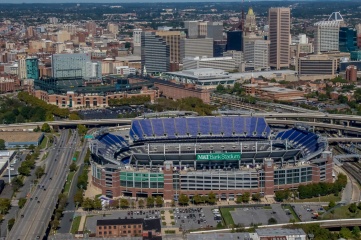 “It was a very positive infrastructure workshop and we’re delighted with the way our campaign is progressing,” said Terrance Hasseltine, President of Baltimore-Maryland 2026 and Executive Director of Maryland Sports Commission. “We were thrilled to present our world-class M&T Bank Stadium and our transformative and compact hosting plans. We are also incredibly proud that our proposed concept offers an unbeatable tournament experience for visiting teams, fans and officials from across the world.

“As a new domestic market for the FIFA World Cup, Baltimore-Maryland is an opportunity for FIFA and U.S. Soccer to capture the attention of more fans and accelerate the overall development of football in the U.S. FIFA World Cup 2026 in Baltimore will provide a great social and economic boost, inspire a new generation of football lovers and create a tangible legacy for all.”

The bid team highlight the stadium’s downtown location, with more than 10,000 hotel rooms within walking distance, and 10-mile proximity to the BWI Marshall International Airport.

Hosting the FIFA World Cup 2026 would accelerate Baltimore-Maryland’s urban development plans, which the bid team say are approved and supported by all levels of city and state government. Baltimore-Maryland plans to boost sporting and recreational activity with more green spaces, sporting facilities and football development initiatives.

“Maryland is united behind our bid to bring the 2026 FIFA World Cup to Baltimore. We are fully committed to Baltimore as a great Host City that offers not only quality venues for competition, but a rich history and love of sport that brings people together,” said Maryland Lt. Governor, Boyd Rutherford.

“Baltimore’s diverse communities, public institutions, and business communities are working hand-in-hand and looking forward to providing teams and fans from all over the world with the best FIFA World Cup experience possible. We appreciate the helpful insights provided by FIFA and U.S. Soccer during today’s workshop.”