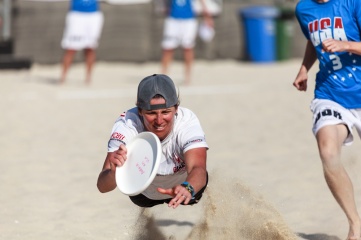 Flying disc is one of the sports applying through a process that is prioritising youth appeal. (Photo: Dubai Beach Ultimate 2015 by Mehdi Photos / Shutterstock)

American football, baseball, karate and squash are among the sports vying for inclusion as additional events in the Tokyo 2020 Olympic Games

The organising committee of the Tokyo 2020 Olympic Games revealed on Friday that 26 international federations (IFs) are bidding for inclusion, with sports ranging from American football, baseball and karate to surfing, bridge and flying disc.

Tokyo 2020 said the additional events must “serve as a driving force to promote the Olympic Movement and its values, with a focus on youth appeal,” and “add value to the Games by engaging the Japanese population and new audiences worldwide, reflecting the Tokyo 2020 Games vision.”

Since the IOC’s approval of Olympic Agenda 2020 last December, hosts of the Games are able to propose one or more additional events to add to the sports programme – much like the process employed by the Commonwealth Games Federation.

Applications for the additional events opened on 8th of May with a deadline of 8th June. The long list of 26 applicants was revealed after an Executive Board meeting on Tuesday 12th June.

The applications will now be reviewed by the seven Japanese members of Tokyo 2020’s “Additional Event Programme Panel” and a shortlist will be announced on 22 June 2015.

The shortlisted will then submit further details and make a presentation to the Additional Event Programme Panel, who will then propose its recommendations to the Tokyo 2020 Organising Committee, which will decide on the events to be proposed to the IOC.

The final decision will be made the IOC at its 129th Session in Rio in August 2016.