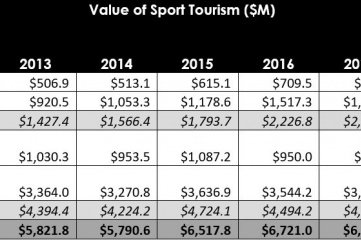 [Source: Canadian Sports Tourism Alliance] Figures released by the Canadian Sport Tourism Alliance demonstrate that the sport tourism industry continued to have a significant impact on the Canadian economy in 2017. According to custom data tabulations from the Travel Survey of Residents of Canada (TSRC) and the International Travel Survey (ITS), Canada saw a continued rise in the value of sport tourism, with a total expenditure of $6.8 billion, an increase of more than $33 million over 2016.

The most significant increases occurred in the spending of visitors from the USA and worldwide.

International sport tourism from both markets continued their steady increase with 2017 up 5 per cent over the previous year.

International visitors accounted for 35 per cent of the total value of sport tourism in Canada, up from 27 per cent in 2014.

“Canada continues to be a very attractive host country for many international events, which draws people coming to compete, support and spectate at those events,” said Rick Traer, CEO, Canadian Sport Tourism Alliance.

“We have a stellar reputation for our expertise in hosting both summer and winter sports, with excellent facilities, organizational abilities, welcoming volunteers, and strong hosting program financial support at the federal and provincial levels.”

There has also been a concerted effort to market Canada as a preferred host for international sport events, said Traer.

“Working with Destination Canada, the Canadian Olympic Committee, CBC Sports and a number of destinations across Canada, we have successfully marketed Canada on the world stage, at major international conferences including SportAccord and others.

“In 2017, Canada hosted 41 international events that qualified for funding under the federal government’s hosting program, second only to the USA in terms of the number held in any one country. That was a major factor in the growth of the sport tourism industry.”

Traer was also pleased to see the industry continue to thrive without a major multi-sport event held in 2017. “We saw visitation increase significantly in 2015, when Canada hosted both the FIFA Women’s World Cup Canada 2015 in six different cities and the 2015 Pan Am/Parapan Am Games in Toronto. Seeing the steady increase in the past two years, without a major sport event as a draw, demonstrates just how effective our destinations and sport rights holders have been in bidding for and hosting events.”