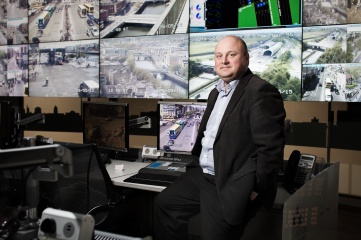 With funding from the European Research Council, Professor Rob Kitchin of Ireland’s National Institute of Regional and Spatial Analysis is finding out how to leverage Big Data to improve city life

Modern cities generate a flood of data, and much of it is public. Transport companies know how their trains, buses and cars are travelling. Payment systems monitor the availability of parking spaces. CCTVs provide real-time video links. Environmental sensors track air and water quality.

There’s even big data on garbage: networked compactor bins use sensors to monitor waste levels and allow collection routes to be optimised.

Two years ago, Rob Kitchin, a professor at the National Institute of Regional and Spatial Analysis at Ireland’s Maynooth University launched a novel app, the Dublin Dashboard. This publishes sensor-readings about the city, providing citizens, public sector workers and companies with real-time information, time-series indicator data and interactive maps about all aspects of Ireland’s capital. The data sets are compiled on an ongoing basis by the Irish Central Statistics Office and Eurostat.

Kitchin has built an easy to use interactive website featuring maps, graphs and apps. The data available covers a variety of areas, from transport, housing and planning to the environment, emergency services and health.

“And all the data is open,” Kitchin says. “Everybody can go and build their own apps off this, or they can just look at it.”

Although the Dublin Dashboard obviously useful – and fun – there is a serious side too, translating into what Kitchin calls new forms of governance.

Cities around the world are demonstrating how it works. Atlanta has a purpose-built dashboard room, where city government meets weekly to assess metrics. Rio de Janeiro built an “urban operations centre” with data streams from 30 government agencies, to try to manage the potential chaos of the World Cup in 2014 and the Olympic Games happening there this year.

Many cities have litter bins with sensors to signal when they’re full – meaning the garbage trucks can plot more efficient pick-up routes.

Kitchin’s Big Data even helps with policing. Based on perfectly reasonable evidence – neighbourhood crime statistics, social media connections, for example – a person may seem statistically likely to commit a crime. With that information, the police or social workers can be pro-active and offer help or warnings.

The problem, says Kitchin, is that “you don’t have evidence that this person has committed a crime … but you’re already treating them as a criminal.”

Of course, this information torrent often can turn into a dangerous flood. It can lead managers, distracted by all the data, to focus on the wrong problems – what Kitchin calls “technological solutionism.” For instance, he says, with more data “you might be able to better manage homelessness, but you’re not going to stop people becoming homeless.”

The Big Data flood also poses privacy challenges. In January of this year, Kitchin published a new report on the issue. Entitled “Getting smarter about smart cities: Improving data privacy and data security”, it argues that the “haphazard” approach to the development of networked technologies for so-called “smart cities” cannot be allowed to continue without taking proper account of privacy challenges.

“Never before has so much information about people – their characteristics, their location and movements, and their activities – been generated. These data can be put to many good uses, but they also raise a number of issues with respect to data privacy, data protection, and data security,” the report says.

But the report also cautions against becoming “overly focused” on the negative concerns and harms lest they stifle innovation. While the concerns relating to smart cities are “significant”, we need to remain mindful of their potential benefits in producing “more efficient, productive, sustainable, resilient, transparent, fair and equitable cities”.

Kitchin recommends the establishment of advisory boards and governance and ethics committees to oversee such smart city projects. An emergency response team should also be appointed to tackle cybersecurity incidents, where data was hacked or compromised.

“I advocate a much more systematic approach that aims to gain the benefits smart-city technologies offer, whilst minimising the potential risks,” he says.

In coming years, Kitchin plans to extend the scope of the Dublin Dashboard project to include other data and information such as maps of social media.

This article was written by William Echikson