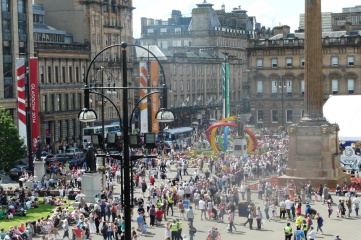 More than US$1bn (£669m) of contracts were awarded in relation to the Commonwealth Games, bringing lasting economic benefit to the host city and nation

The majority of these “Tier One” contracts were awarded to companies and organisations from Glasgow, which won over US$636 (£423m) of business.

More than three quarters (US$766m, or 510m) of the total value of contracts was awarded to Scottish firms.

As part of regeneration initiatives in Glasgow, Games-related contracts included community benefit clauses that created employment and business opportunities for local people and companies and led to the long-term unemployed and school leavers winning places on high-profile construction projects across the city, the Council said.

"It's enormously heartening to read these hugely impressive figures about the jobs, apprenticeships and contracts gained by Glasgow people and businesses as a result of our Games,” said councillor Gordon Matheson, Leader of Glasgow City Council.

“We also retain the skills, facilities and enhanced international reputation that ensures we will continue to attract world-class events in the future.

"The world knows that Glasgow delivered the best Commonwealth Games there have ever been. But the Games were always about much more than 11 spectacular days of sport and cultural festival, however wonderful and memorable. What matters most are the lasting benefits for the people of Glasgow.”

In the run-up to the Games, the council and its partners engaged with the city’s communities and businesses through the Get Ready Glasgow programme, advising on Games-time operations and how local firms would maximise the opportunities available.

To bid for a Games-related contract, firms and organisations had to register on the Glasgow Business Portal. Over 22,500 registrations were made on Portal, with over 4,400 from Glasgow.

To ensure the long term sustainable legacy of these outcomes, the Glasgow Business Portal merged with the Scottish Government’s Public Contract Scotland (PCS) during November 2014, with the merger providing more efficient service for suppliers by ensuring all opportunities and sub-contracts for public bodies are advertised on one dedicated site.

The city council says it is now seen as a model in awarding public sector contracts.  The £1.13bn Glasgow City Region City Deal, signed in August 2014, is viewed as another chance to deliver significant community benefit for Glasgow and the surrounding areas.

The council says its ambitious Commonwealth Apprenticeship Initiative has found Modern Apprenticeship places for almost 3,600 Glasgow school leavers over the past five years.