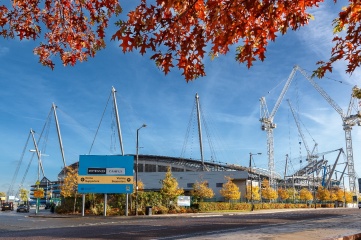 Can China’s sports market really reach a trillion dollars, what’s to be gained from investing in the world’s leading football clubs – and when will the country host the World Cup? HOST CITY investigates

China’s economic growth may have cooled down from its double digit rates of recent years but the country’s sports sector is powering ahead, both at home and abroad, with sports identified as a key area of economic development for the coming ten years.

Beijing is set to invest USB 1.5bn in hosting the Olympic Games in 2022, but this is a tiny fraction of the total domestic investments into sport China is set to make over the next decade.

China’s national plans for investing in sport are unprecedented.  According to the General Administration of Sports (GAS), the sector in China is set to expand to US$1tr by 2025 – more than the value of the entire global sports industry at present.

To achieve this sustained growth in sports, the government has recently issued 50 documents setting out a series of measures, focusing on tax incentives, land security, specialized funds, technology and research and development.

It’s not just on home turf where China’s ambitions lie. With international reserves far outweighing any other nation, China is investing far and wide – and focusing on sports properties.

In a process dubbed “stadium diplomacy”, China has built and financed the construction of 37 venues in Africa, five in Asia (including Syria), eight in the Caribbean, six in the South Pacific and one in Central America (Costa Rica).

And over the last two years, Chinese investors and firms have bought into football clubs in England, France, the Netherlands, Spain and the Czech Republic.

For football clubs, the opportunity of Chinese investment brings access into China’s rapidly growing sports sector. The Chinese market is a crucial target for global football brands to grow their fan base, not only because of the sheer size of the market but because of the growing interest in football there.

"The deal will create an unprecedented platform for the growth of CFG clubs and companies in China and internationally, borne out of CFG's ability to provide a wealth of industry expertise and resources to the rapidly developing Chinese football industry,” Manchester City said in a statement.

"The capital from the share acquisition will be used by City Football Group to fund its China growth, further CFG international business expansion opportunities and further develop CFG infrastructure assets."

It’s not just state-owned investors that are capitalising on the global football industry – Chinese private enterprises are also getting in on the act.

And in December 2015, FIFA announced China’s Alibaba E-Auto as sponsor of the FIFA Club World Cup – the first new sponsor signed by FIFA in two years.

"We are delighted to welcome Alibaba E-Auto as Presenting Partner of the FIFA Club World Cup and are excited to be working closely with them to embark on a journey to reach fans across the world,” said FIFA Marketing Director Thierry Weil.

“We also hope to benefit from their innovation, and are looking forward to seeing what they can bring to the FIFA Club World Cup over the next eight years.”

Daniel Zhang, Alibaba Group CEO said: “Sports is at the intersection of Alibaba Group’s strategic themes of health and happiness, and we look forward to adding new value for participants and consumers in the sports sector through data-driven Internet technology.

“Partnering with a major sporting event with a global audience such as FIFA Club World Cup is also an important part of Alibaba Group’s globalisation strategy for connecting China to the world.”

The partnership is also seen as a means of increase China’s stature within FIFA.

China is not yet a major force when it comes to playing football. The country has only qualified for the FIFA World Cup once, in 2002, and it currently sits at 84th position in the world ranking.

But it is hoped that all this investment into sports will help raise the standard of the game in China. And while the country isn’t yet among the best at playing the game, it certainly has a strong track record of hosting major events and a bid to host the World Cup would be welcomed by FIFA.

The host of the 2026 World Cup is due to be elected at the FIFA Congress in Kuala Lumpur in May 2017. For the first time, all FIFA’s 209 member associations will have a vote, instead of just the Executive Committee members.

The bidding process has not officially begun and bids are unlikely to be announced until the dust begins to settle on FIFA’s process of transition.

FIFA dropped its policy of continental rotation in the bidding phase for the 2018 and 2022 World Cups and the organisation decided not to vote on reintroducing the policy at its Congress in 2015.

If the policy were to be reintroduced, China would be out of the picture until 2030 – assuming Qatar retains its right to host the 2022 World Cup.

But as things stand, a bid from China for the 2026 World Cup is possible and would be strong competition to a bid from the USA. With the coming years set to be a time of renewal for FIFA, taking its flagship event into the world’s largest growth area would no doubt be an appealing prospect for the world’s football leaders.