Home
»
News
»
Brazil must make the benefits of hosting clearer 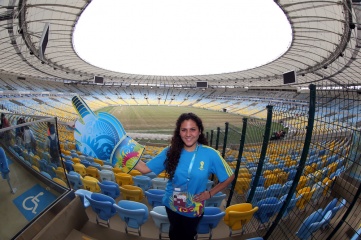 Brazil’s government should have communicated the benefits of hosting the World Cup better and worked more closely with organisers, the deputy sports minster admits

Speaking to a select group of international media including HOST CITY on Wednesday, Brazil’s deputy sports minister Luis Fernandes said the federal government should have worked more closely with the local organising committee in the earlier stages of preparing for the World Cup.

The government also made the mistake of assuming that the Brazilian public would support the event and understand the benefits of hosting it, he said, acknowledging that these mistakes should not be repeated in the run up to the Olympic Games in 2016.

“We should have communicated more strongly the benefits that the World Cup brings to the country,” Fernandes said.

“I think basically we thought that the benefits were evident and that the World Cup addresses our main sport, which is football or soccer in the US, so that support and understanding of the benefits in the event would be almost automatic.

“That’s something that we will have to communicate stronger for the Olympic Games.”

The government should also have made it clearer that investments in civic infrastructure are not part of the cost of hosting the World Cup, Fernandes said.

“In a lot of infrastructure investments, which are not essential for the event, but which the Brazilian government decided to anticipate, were sometimes understood as costs of the World Cup.

“So, we’ve learned from that lesson and for the Olympic Games, we’re separating in our communications these two aspects. The matrix of responsibility will only include for the Olympic Games those investments that are specifically directed to the event, to the global sporting events.

“All communication about separate investments in infrastructure that will spur national and regional development are in a different plan, which is a plan for anticipation and exploration of investments in public policy. So, that’s maybe a lesson we learned from the World Cup experience.”

He also admitted that the federal government should have been more closely integrated with the local organising committee at an earlier stage.

“We were only included in the board of the local organising committees of representation of the federal government a little bit more than two years ago. I think that if we had been included from the very beginning, the level of integration in World Cup preparation would have been greater, and that would have been better.”