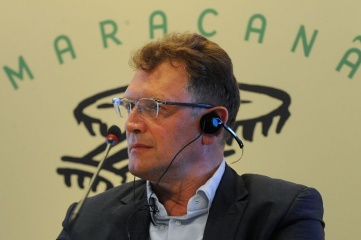 Jerome Valcke is to join the board meeting of the local organising committee at the Maracana Stadium. Picture: Agencia Brasil, http://bit.ly/1jblOoJ

Delays and uncertainty over World Cup stadiums have motivated FIFA secretary general Jerome Valcke to make a special visit to Rio de Janeiro  from 24 to 27 March, bringing an early end to a technical tour of host cities that began on Thursday 20 March.

“Any envisaged on-site host city visits will be rescheduled to the next tour planned for the end of April,” said FIFA in a statement.

Concerned about overlay projects and three unfinished stadiums, Valcke is travelling to Rio de Janeiro for a series of meetings. The visit culminates in a board meeting of the Local Organising Committee (LOC) and media briefing at the Maracana Stadium.

“This is the last occasion for the organizers to take stock of the operational preparations before the respective FIFA World Cup installations begin to be implemented in all 12 host cities,” said FIFA.

The LOC is currently taking FIFA’s technical experts on a tour of stadiums in Sao Paulo, Porto Alegre, Curitiba, Cuiaba, Manaus and Natal – the six venues that did not feature in last year’s Confederations Cup. The tour was due to conclude in Natal on 26th March after a visit to Manaus on 24th March, but these two site visits now look set to be postponed to April.

“This inspection tour will be fundamental to consolidate operational plans and for each area to confirm the operations they have planned over the last few years,” said LOC Stadiums Operations Manager Tiago Paes.

FIFA had originally requested that all venues be finished by December 2013, but three remain under construction. Itaquerao stadium in Sao Paulo and Curitiba's Arena da Baixada are now unlikely to be finished until the middle of May – just a month before the opening match in Sao Paulo. Cuaiba’s Arena Pantanal is due to open in April.

The pitch at Manaus is also undergoing emergency repairs after the turf was damaged by excessive use of fertilizer. Manaus hosts England and Italy’s first World Cup fixture.

Valcke has reportedly voiced concerns about responsibility for temporary infrastructure. Local newspaper Estado de Sao Paulo said Valcke is concerned that some cities are refusing to pay for temporary items such as security equipment and temporary structures for media, volunteers and sponsors, causing delays to overlay works.