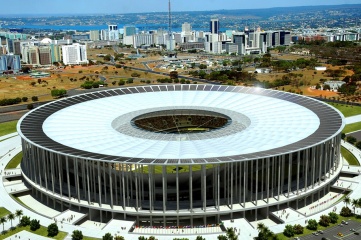 Building and operating a sports stadium requires huge quantities of steel, concrete, electricity and water. Here’s how to reduce the footprint

Sustainable construction has not historically been a leading concern when developers confront the challenge of erecting an arena from scratch to a pressing deadline. But gradually the green agenda has gained ground in the list of key considerations for hosting sporting events, while some leading clubs have also developed environmental awareness.

The US has been the trailblazer, with many of the biggest names in American sport now belonging to the Green Sports Alliance, a non-profit organisation that helps members enhance their environmental performance.

As identified in the NRDC’s “Game Changer” report, greener stadiums not only benefit the environment and cut utility bills but also have potential to improve community ties, attract corporate sponsors and can boost the local economy.

We can expect even greater commitment to sustainability from big sports clubs globally in the coming years. The current issue of HOST CITY magazine looks at three stadiums that set standards for other developers to aspire to.

This is the only stadium in the National Football League (NFL) that is home to more than one club. But the energy savings it has achieved since opening in April 2010 go far beyond the benefits derived from the ground-sharing arrangement between the New York Giants and New York Jets.

Few stadiums globally have earned Leadership in Energy and Environmental Design [LEED] awards of any level from the US-based Green Building Council.

Now, this US$640m stadium in Brazil’s capital is ready not only to host seven matches in the World Cup but to seek the highest LEED rating available: platinum.