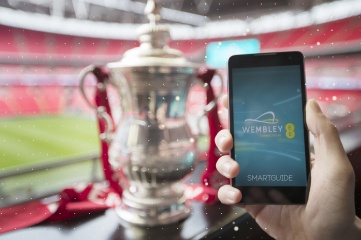 EE, in partnership with Wembley Stadium, has launched what it describes as the world’s most technologically advanced stadium tour

Stadium tours reached a new level on 18 July with the opening of the “Wembley connected by EE” tour.
The ever-popular tour of England’s national stadium is now enhanced by the EE SmartGuide – a bespoke connected device given to each tour participant. 360 video and augmented reality delivered via the EE SmartGuide’s iBeacon technology allow audiences to relive key sporting and music moments whilst exploring the iconic ground.
“The partnership between EE and Wembley Stadium has been focused on bringing the best connectivity to the best stadium and our investment in the Wembley tour marks another major step in enhancing live stadium events with the power of technology,” said Mat Sears, Director of Communications at EE.
“The revamped tech-enhanced tour will further cement the stadium’s position as one of the most connected in the world.”
Tour participants receive stats, imagery and video on the handset at select locations within the stadium to enhance the tour experience. These include the crossbar from the 1966 World Cup Final, the players' changing room and the press room.  A 360 degree video feature will overlay footage of live events in the stadium bowl to bring Wembley and its history to life.
“From England’s glorious World Cup victory in 1966, Ed Sheeran’s three night sold out residency, to the on-going tradition of The Emirates FA Cup Final – Wembley Stadium has been home to some of the greatest moments in both football and entertainment”, said Julie Harrington, FA Operations Director.
“We’re thrilled to be launching a brand new Wembley Stadium Tour in partnership with EE to uncover these historical moments and offer a behind-the-scenes experience at the most famous stadium in the world.
With the addition of the new EE SmartGuide, we can now offer a truly immersive and multisensory experience to visitors. This innovative technology will enhance the tour experience and bring the history of the stadium to life, whilst the continued presence of our tour guides will to offer a personal touch and charm as visitors explore the stadium. We hope that the improved tour experience will ensure that Wembley Stadium remains a must-see London attraction.”
Gordon Banks, OBE, attending the launch of the tour, said: “It is incredible to see the evolution of the home of English football. The stadium is hugely impressive and this latest move from EE is the next step in bringing technology closer to live sport. For me, it’s incredible to see some of my favourite memories being enjoyed by so many as part of the Wembley Tour.”