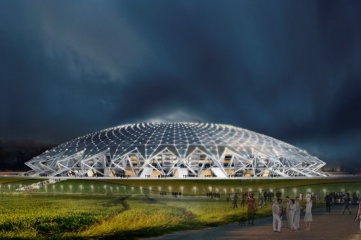 Construction has begun on the latest stadium for the 2018 FIFA World Cup in the Russian city of Samara and was heralded in a special ceremony attended by president Vladimir Putin, but concerns still remain over the delays and inflated cost of many of the stadiums.

The new stadium in Samara is set to have a capacity of 45,000 and will become the home of local club side Krylia Sovetov following the 2018 World Cup. Construction work on the stadium is expected to be completed in summer 2017 and will be linked to the city and wider region with new local infrastructure development.

Also in attendance at the ceremony was sports minister Vitaly Mutko. “All technical and administrative issues have been resolved and today we are starting to build the stadium” he said. “There are still key questions concerning the city's development… but first and foremost is the sporting infrastructure that will be built here. Samara is football's capital on the Volga. We are looking forward to all the necessary conditions being created for footballers and teams, as well as for fans to be welcomed.”

Three of the planned 12 World Cup stadiums are currently completed, with two of them requiring reconfiguration in order to host football games. Whilst the Russian Government is insisting that all the stadiums will be completed on time, previous delays have raised alarm.

Organizing committee head Alexei Sorokin told the Associated Press: ''That is a normal working concern. That does not mean we are lying down calmly and waiting for things to happen. It suggests that we are ... attentive to it.''

Whilst some of Russia’s World Cup plans appear to be on time and on budget, delays and rising building material costs are a cause for concern. The St. Petersburg stadium, for example, was due for completion in 2008 but is now unlikely to open before 2016 and at a hugely inflated cost of $1.1 billion.

There have also been a number of concerns over infrastructure spending and logistical challenges associated with holding the World Cup in Russia but officials have maintained that these issues can be resolved on time.

FIFA have said the design work for all the other stadiums is now completed and construction work is expected to begin this autumn.