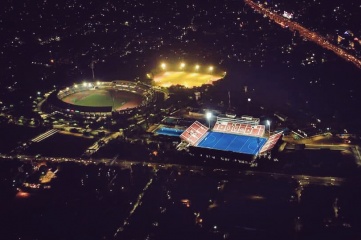 Host City: Bhubaneswar is hosting FIFA U17 Women’s World Cup in November – how much work is there still to do to prepare for this?

Tusharkanti Behera: We are very committed in our efforts to host the FIFA U-17 Women’s World Cup in the best way possible, like when hosting previous international tournaments. We are looking to finish building and upgrading all the infrastructure by the first quarter of this year itself, as per the FIFA guidelines for the World Cup.

We are confident that the event will make a positive impact and help create a football ecosystem for the youth of the state and inspire more women to take up the sport.

Host City: Further down the line, Odisha is hosting the FIH Men’s Hockey World Cup in 2023. Why do you think Odisha was selected to host this major event?

Tusharkanti Behera: Odisha has been doing rather well for quite some time in sports, especially hockey, and we will be hosting the Hockey World Cup for the second consecutive time. The fact that the Hockey World Cup 2018 was heralded by the FIH President as the best Hockey World Cup in history says a lot about the efforts made by the state and everyone involved in the delivery of the tournament. Moreover, we have built the state-of-the-art Kalinga hockey stadium, which is one of the best in the world.

Host City: What part do these events play in Odisha’s hosting strategy? Will this help Odisha bid for even bigger events in the future, and what kind of events are you looking to host?

Tusharkanti Behera: These events are testimony to the efficient delivery of international tournaments by the Odisha government and now the world knows of our capabilities.

We are more than willing to organise international events as and when we are offered something. Indian Olympics Association (IOA) President Mr. Narinder Batra has already said that whenever India gets to host an Olympic, Asian or Commonwealth Games, Odisha will definitely be a part of it.

Host City: What other positive impacts will these events bring to the state of Odisha?

Tusharkanti Behera: Hosting big events in the state, apart from developing a sporting ecosystem, also helps create brand equity for the state and boost tourism. The Hockey World Cup 2018 led to an estimated 60 per cent higher tourist footfall in Odisha during November and December 2018.

By leveraging on Bhubaneshwar's appeal as a sports destination, we hope to bolster tourist footfall and earnings by focusing on sports tourism.