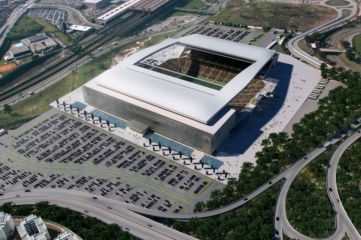 Itaquerão stadium will be ready for the World Cup opening ceremony, says FIFA general secretary, as a rigid deadlines are set for overlay and engineering work

Construction works surrounding the stadium have to be completed be ready by 28 April, while temporary seating inside the stadium must be installed by 10 May, according to local media attending the meeting. A number of test events, starting on 28 April, will take place to ensure the readiness of the venue, which is also known as Arena Corinthians.

Valcke surveyed Itaquerão on Tuesday with Sports Minister Aldo Rebelo and Ronaldo Nazario, board member of the Local Organising Committee. "There is still much work to do; it's a race against time, but I can say that the opening match will take place here in the Corinthians stadium," Valcke is reported to have said.

A walkway that connects the subway station to the stadium will also be completed in May, according to Julius Semeghini, state secretary of planning and regional development.

FIFA has also been monitoring road works around the stadium. According to local media, Rebelo said at the meeting "I had the opportunity to move around the vicinity of the stadium before entering to see the urban mobility works underway. I saw some completed, others in an advanced stage.”

Some small events to test the structure of the stadium have been scheduled for the 26 April, 1 May and 10 May, before FIFA’s evaluation. "The important date is the FIFA test game on 17 or 18 May. We will able to find out if everything is working and we will still have a period of three weeks to solve problems," Valcke  is reported to have said.

50,000 people are expected to come to the FIFA test event. According to Semeghini, the event will serve to assess the functioning of the integrated command and control centre, the security strategy established for the World Cup host cities.