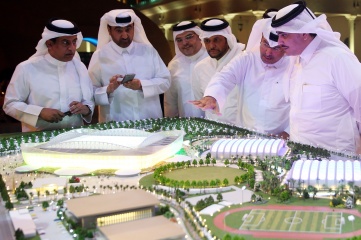 Qatar's Al Rayyan stadium has been redesigned, with the stadium set to be completely rebuilt by 2019 using cooling technology to maximise the playing season in legacy use

The fifth venue plan for the Qatar 2022 FIFA World Cup was unveiled on Wednesday. The new Al Rayyan stadium, which replaces an existing smaller football stadium, will have a capacity of 40,000 during the World Cup and be reduced to 21,000 after the tournament.

The construction project is set to be complete by 2019.

Material from the old stadium is being reused and recycled. The new design incorporates renewable energy and cooling technologies to maximise legacy use.

“Unveiling the design of Al Rayyan stadium is another important step forward in our preparations to host the 2022 FIFA World Cup,” said Hassan Al Thawadi, Secretary General of the Supreme Committee for Delivery & Legacy.

“We will continue to work tirelessly as our vision for the tournament takes shape on the ground.”

The upper tier of 19,000 seats will be removed after the tournament and sent to developing nations in need of sports infrastructure.

“Qatar has moved from the stage of reiterating its bid commitments towards demonstrating its ability to deliver several important infrastructure projects to the highest international standards in accordance with the timetables set,” said Salah bin Ghanem Al Ali, Qatar’s Minister of Youth and Sports.

Even though the 2022 World Cup is set to take place in the cooler months of November and December, the stadium will incorporate cooling technology to maximise the venue’s potential for legacy use.

“The sophisticated modelling employed has heavily influenced the innovative designs for cooling systems and the advanced roof and wind screen design, with best practice being used to optimise designs for waste reduction and energy management strategies,” said Yaver Abidi, regional managing director Middle East and Asia at Ramboll, the lead design consultant on the stadium.

“The Al Rayyan Stadium will deliver an impressive and comfortable experience for fans and players alike and leave a strong legacy for the Al Rayyan community.”

90 per cent of materials from the deconstruction of the current stadium is being re-used. Some of the materials will be used by local and international artists to create works of public art.

Doors, windows, frames, water fixtures and fittings, light switches and sockets have been used in construction site accommodation and offices. Concrete has been crushed and stored for future site levelling works. Reinforcement bars and other metals will be recycled by Qatar Steel. Topsoil has been stockpiled for future precinct landscaping works, while scrap timber will be recycled by licensed centres across Qatar.

The stadium precinct’s carbon footprint will be reduced through the use of on-site renewable energy, lightweight building design, careful selection of materials and energy and water efficiency measures.

The stadium is designed with the goal of certification under both the Global Sustainability Assessment System (GSAS) and Leadership in Energy and Environmental Design (LEED) ratings.

David Barwell, chief executive Middle East and India of AECOM said: “As the project manager for the Al Rayyan Stadium and Precinct, we see our strength in connection, bringing together our global team of experts from previous major sporting and FIFA events, and the embedded knowledge in country, technology and cooling experts, all of which is led by our strong project, commercial management and delivery team.

“We connect the collective knowledge, experience and innovative ideas to create an amazing sporting venue that brings people closer together and close to the action. The community and culture of Al Rayyan has been at the heart of what we are trying to achieve, creating a destination venue that will leave a meaningful legacy they can be proud of, now and in the future.”

The stadium design is intended to reflect Al Rayyan’s sporting heritage and Qatar’s environment, through patterns and designs on the stadium’s façade.

“The stadium’s distinctive façade was created using cutting-edge parametric design tools so that it also plays an important role in cooling the building.” said Dipesh Patel, architect and founder of Pattern Design, the lead design consultants on Al Rayyan. “The result is a landmark for Qatar that works effectively both as a world-stage for sport and, we hope, something that is genuinely meaningful and welcoming locally."