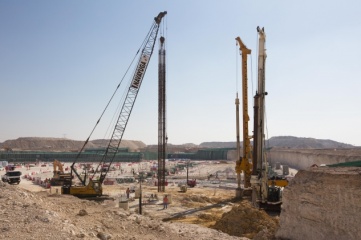 HBK Contracting Company has laid the first concrete above ground at Al Wakrah stadium, the first of five new venues being built to host the 2022 FIFA World Cup in Qatar.

“We have started laying the foundation of 168 m3 of structural concrete in our east slab,” said Abdulla Al-Marri, senior project engineer at the Al Wakrah Precinct.

“This is an important achievement, being the first above-ground casting of concrete at the site which will incorporate the structural elements to begin vertical construction.”

To lay the concrete slab at double the usual speed, HBK is using two pumps that work simultaneously.

The foundations of the stadium will feature 84 concrete piles, measuring 19 m by 1.2 m. Enabling works contractor HBK has poured 55 of these so far, the first pile being cast in December 2014, a year after the designs and location of the first new venue for the 2022 World Cup were made public.

According to the Supreme Committee for Delivery & Legacy, the organisation responsible for hosting the World Cup, a top priority now for the enabling works contractor is to cast the remaining foundations to allow the Main Work Contractor to start building the stadium on these foundations.

The Supreme Committee also identified completing drainage works and excavations around the stadium as a priority for HBK.

According to the Supreme Committee, HBK has completed over one million Lost Time Accident (LTA) free man-hours.

“We observe that all safety measures are in place before works starts and we reward safety practices every month,” said Al-Marri.

The Al Wakrah site is to hold a “safety fair” in March as part of regular safety training across all Supreme Committee sites.

The stadium will have 40,000 seats during the World Cup, with 20,000 seats on the upper tiers to be removed after 2022 and sent to developing countries in need of sporting infrastructure.

The stadium will be the future home of Al Wakrah Sports Club. It will be surrounded by approximately 560,000 m2 (60 ha) of legacy precinct with a new sports centre and community facilities including a park, mosque, school, hotel, wedding hall, vocational training centre and retail outlets.