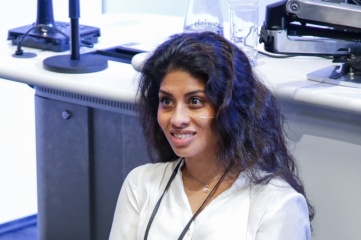 Host City: What to you is the most exciting thing currently going on in the world of major events?

Soaad Stott: Honestly, it’s an incredibly exciting time for the world of overlay – we seem to be at the threshold of some really big changes. The Olympic & Paralympics are obviously the gold standard in our industry, but for good reason. Everything that we do in overlay is on view in this magnificent showcase.

With the approval of Olympic Agenda 2020 in 2014, it became very clear that the Olympic Movement is fully behind the use of existing and temporary venues wherever possible, with the goal of reducing costs, improving sustainability and allowing the hosting of global events to become accessible to a greater number of nations and communities. This is starting to come to fruition - with the forthcoming Games in Tokyo, we’re going to see the first Games designed without an Olympic Park, which will be really exciting.

While the Olympic and Paralympic Games are leading the way on the global scale, this design approach is becoming increasingly adopted by events at all levels. The opportunities that event and overlay design affords for regeneration, activation and innovative design can have a fantastic influence on everyone involved, whether visitors to the events, or residents in legacy. Anyone who saw 2015 The Rugby World Cup at alternative sporting venues across the UK can attest to our industry’s ability to really change the existing conversation or perceived identity around existing venues for major events. The London Stadium and stadiummk were prime examples of new rugby audiences experiencing a venue and having a fantastic experience.

Of course, some sports have a completely unique character, such as the party nature of the beach volleyball tournament, but that is also embraced by temporary design, particularly when the temporary venues chosen are in such spectacular locations like the beach volleyball in the heart of London. During the beach volleyball at both London 2012 and at Baku 2015, dancers would emerge between matches in cheerleader style and energise the audience. Though an elite sport was being played, putting on a spectacular show was also a key part of this event. Temporary overlay design can have a truly special character, all of its own, and that’s what we really aim for at Populous.

Host City: A really exciting project you are working on is Paris 2024, following on from your successful work on London 2012.

Soaad Stott: It seems that Paris 2024 is taking the lead from London on how to do overlay better. As I said, the huge amount of temporary overlay and facilities in London set a real precedent.

Paris is the Park and the design of every venue has some legacy and sustainable content. There were so many meetings; not just with the International Federations, but also with the city and its residents.

A large number of the drawings we produced during the bid phase are actually to demonstrate the plans the stakeholders, local councillors and residents, making sure that everyone was informed and on board with the plans for the Games and for legacy, which forms a major component of the bid we created with Paris 2024.

Most of the venues are already there – we were just making sure the plans were feasible and genuinely workable and what people wanted.

Host City: How does the design of the Olympic Games fit in with the city of Paris?

Soaad Stott: Because there is no Olympic Park in the bid, Paris itself really is the park. It’s very much part of philosophy of these Games, that it’s for Paris as a whole and not just pockets of Paris.

In somewhere as compact as Paris where space is such a premium, there are challenges but definite benefits. There’s an energy and charm that you get from having all the landmarks close together.

As well as historic beauty, Paris also has a modern urban side. We wanted to make sure all these aspects were incorporated and all represented in the designs. One of the brilliant things was being able to locate some of the new Olympic sports in ancient monuments and sites and have the juxtaposing of the modern with the old, beautiful Paris.

We designed it so that every venue would have a similar feel. Everywhere you go you will have the same Olympic experience. The streets and boulevards will also be part of the whole experience of excitement people moving around the city, with parks becoming community activation sites and fan fests. It will be an incredible experience, with the most beautiful and iconic spaces within Paris, such as the Eiffel Tower and the Palace of Versailles, being infused with a sporting identity through the Olympic and Paralympic Games.