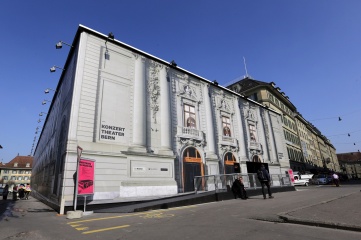 European Football Championship matches will be screened inside the temporary structure

Theatre lovers in Bern are being offered something very special. Performances for the 2016 season take place not in the usual venerable municipal theatre, but in the middle of Bern's Old Town. NUSSLI has installed a temporary theatre cube, with a historical appearance, in record time on Waisenhausplatz.

The theatre opened on March 19 with a programme of exciting, impassioned and fascinating performances that runs until October 2016.

"If the restoration work at the municipal theatre is delayed again, we can easily leave the cube standing for another season during the winter or even adjust the building to changing needs at a later date," says NUSSLI Project Manager, Christian Frei.

For a year and a half, Frei and his team worked on the development of the system with which the halls can be constructed within a very short time, even at the most unusual locations, in any size and with column-free spans of up to 40m.

Efficient and Easy to Build

Frei was often on site during construction on Waisenhausplatz and lent a hand time and again, because the assembly of the modular hall system is almost as thrilling as its unlimited applications.

At the very beginning, the assembly crew installs the external structure with the flexible NUSSLI construction system. Then, they completely assemble the roof structure, including the sound and lighting fixtures, on the ground at a comfortable working height within the designated construction area. Finally, the entire roof structure is moved to its final height.

This construction method reduces the required installation space to a minimum and enables installation even on sensitive ground while increasing the safety of the crew. All the streets around the cube on Bern's Waisenhausplatz were able to remain open to traffic throughout the construction, and the crane-free assembly did not stress the underlying parking garage structure in any way.

The program was therefore put together with a conscious effort to include events which reflect the central position in the public square and appeal to various interests. So, a tango milonga, a public viewing of the European Football Championship and a James Bond evening are scheduled in addition to ballet, opera and drama.

The modular hall system offers some important advantages, especially for construction projects in public places, on sensitive ground, or with limited access. The construction system requires no foundations, there is significantly less point loading than with construction using conventional steel supports, and the total load is evenly distributed over the entire ground surface.

Because Waisenhausplatz sits directly atop a parking garage which is subject to special static requirements, there were no problems for the theatre cube despite its 1000sq m size and 200-ton weight. No heavy crane equipment is needed, especially for assembly work in modular hall system.

"We could have set the theatre cube up on the Pilatus or on a golf course," laughs Project Manager Frei. "That would work."

The planning of the Bern Theatre cube with 480 seats, catering, backstage and technical areas as well as a cloakroom took less than a year.

"A month after the first truck rolled out with its material, the cube was already cladded, equipped, and ready to go," recounts Christian Frei.

He is looking forward to the reactions after the first performance, but adds quite calmly: "If the theatre organisation still wants modifications, it can be quickly and easily adjusted. The walls of the cube are also made of system material. They have just the exact thickness so that the entire installation can be accommodated in them and still remain easily accessible."

Plans for the next projects with the modular hall system are already underway. Besides other theatre constructions, NUSSLI is planning a double-decker bridge for the IndyCar race in Boston in September. A bridge that has it all, because it crosses over the racetrack to the South Boston waterfront and will be equipped as a VIP lounge.

The sophisticated structure consists entirely of system material. Therefore, it is possible to start construction one day after approval of the construction concept on the part of the client or the authorities - which is unparalleled.

This article was written by NUSSLI