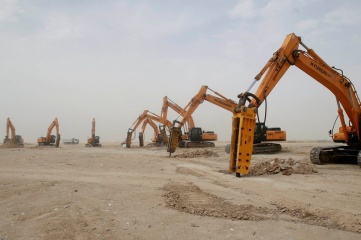 At Al Wakrah, work is underway that will allow foundations to be laid in September 2014, when the main construction contractor will be announced

Preparations to lay the foundations for Al Wakrah Stadium, the first stadium being built for the Qatar 2022 FIFA World Cup, began on Monday.

Local construction company HBK has started major excavation work on the site, which will enable the foundations to be start being laid in September 2014.

The groundwork is scheduled to be completed by March 2015, with the entire stadium project expected to be finished in 2018.

AECOM is providing design consultancy and construction supervision services on the stadium, which was designed by Zaha Hadid. The preparatory works at Al Wakrah were carried out by AMANA, a Middle Eastern firm with headquarters in United Arab Emirates. The contractor for the main construction phase will be announced at a ceremony in September.

The 40,000 seater stadium will be surrounded by a 560,000 m2 (60-hectare) precinct, which will include a new sports centre and a range of community facilities including a park, mosque, school, hotel, wedding hall, vocational training centre and retail outlets.

The stadium’s modular design will allow 20,000 modular seats to be removed after the World Cup, when they are planned to be donated to countries in need of sporting infrastructure, according to the Supreme Committee.

The contract with HBK contains the Supreme Committee’s new Workers’ Welfare Standards, aimed at protecting the rights of workers through all stages of contracting. “The new Al Wakrah Stadium will contribute to a significant legacy of enhanced workers’ welfare in the country,” said the Committee.

Al Wakrah is one of at least eight stadiums that will form part of the 2022 FIFA World Cup.

By the end of 2014, at least five World Cup stadiums are scheduled to be under construction, with the total number of venues to feature in the tournament to be confirmed by December. Three existing stadiums – Khalifa, Al Gharrafa and Al Rayyan – are to be expanded for the 2022 World Cup.