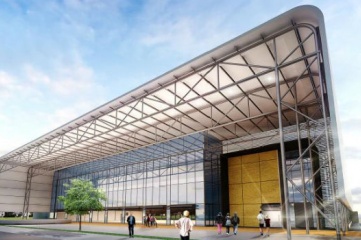 The Coomera Sport and Leisure Centre is part of the next stage of development and will host the gymnastics and netball at the 2018 Games. (Photo: Gold Coast 2018)

The next stage of sporting infrastructure development for the 2018 Commonwealth Games on the Gold Coast will be underway in the coming months, according to the Australian Ministry for Sport

The Commonwealth Games Federation has approved the final list of venues for the 2018 Commonwealth Games, allowing the next stage of development work to go ahead aided by AU$156 million provided by the Australian Government.

The next phase of construction includes the new 2,500 seat Carrara and Coomera Sport and Leisure Centres.

“The new and upgraded venues will leave a lasting legacy for the Gold Coast, Queensland and Australia. Not only will the 2018 Games help usher in the next generation of elite Australian athletes, but the new and improved sporting infrastructure will greatly benefit grassroots sporting programmes across Queensland. This will help to encourage higher rates of participation and promote the many benefits sport and physical activity brings.”

The Ministry for Sport believes the 2018 Games will provide a positive legacy for Queensland and the Gold Coast and expects the event will reap long-term benefits for “tourism, business development and improved social outcomes.”

“The 2018 Gold Coast Commonwealth Games will once again showcase Australia to the rest of the world as a first-class sporting destination, with first class venues,” said Dutton.

“After the success of the Glasgow Games, it’s clear that the Commonwealth Games are still viewed in high regard by spectators and athletes and remains an important part of the sporting calendar.”

15 out of 17 sports will be hosted on the Gold Coast, with track cycling and shooting to take place in Brisbane and some preliminary basketball games to be held in nearby towns.