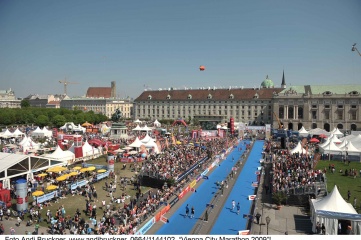 Marathons in cities such as Valencia, Berlin, Frankfurt, New York, Linz and Vienna are major attractions and a mainstay in many a runner's calendar. Organisers make these sporting events highly memorable, with flexible infrastructure enabling athletes and spectators to take in the most scenic and historical attractions alongside a programme of entertainment.
In the Divina Pastora Marathon, taking place in the Spanish city of Valencia each November, competitors run the final 200 meters on the water for an unforgettable home stretch, cheered on by spectators. This experience is made possible by NUSSLI laying down 2,000 sq m of running track in the water in front of the Museum in the Ciudad de las Artes y las Ciencias.
There are also event structures for spectators, including a grandstand with 1,000 seats, plus platforms for VIPs and the media and a stage for concerts and shows — all built in the water.
Public races are a great way of enabling a large number of people to truly experience a city or region. In Linz, more than 100,000 fans cheered competitors on last April. In New York it is estimated that there are more than two million spectators each year.
In order to offer competitors and spectators the most engaging experience possible, organisers not only choose routes with breath-taking scenery but also provide an entertainment programme.

Vienna City Marathon
Vienna’s impressive marathon route takes runners past UN skyscrapers, over the Danube and through the Prater Park – all to the sound of waltzes by Strauss. Spectators get to experience everything up close, thanks to three 500-person standing grandstands set up by NUSSLI along the running route.
In last year’s Vienna City Marathon there were also special sponsor structures. These included a roofed 4 m high 72 sq m platform on which sponsor OMV provided guests with catering and a great view of the race; and Coca Cola’s 6 m high and 4 by 4 m wide tower surrounded by a winding staircase.
NUSSLI developed a flexible, high-quality system for branding the facades of these and other sponsor structures. Giant images displayed advertising messages on the sides of the structures. Printed sheets of mesh fabric were stretched over piping rails and looked great even up close.
The difficulty was not getting event structures to look good, but being able to build them in the first place. Since 2016, the finish area has been located directly on the Ringstrasse between the town hall and the Burgtheater in Vienna's city centre. The Ringstrasse is one of Vienna's busiest streets with car and bicycle lanes, as well as several lines for trams that pass by every minute.
"The assembly team had to build up to a distance of 20 cm from the street trams. Full concentration and attentiveness were required at all times," Gerfried Salzer, the NUSSLI project manager says.
"Furthermore, it also meant that we could only set up from behind, where we had very little space to manoeuvre due to the tents, containers, equipment, and toilet installations."

A stadium for the triathlon
Beautiful surroundings attract more participants, which is why triathlons often take place in areas with spectacular scenery.
The DATEV Challenge in Roth, Bavaria, Germany is the biggest long-distance triathlon in the world. The challenge of a 3.8 km swim, 180 km bicycle race, and a 42.2 km run drew 5,300 competitors and attracted 200,000 spectators last year. The best finished in less than eight hours.
Once again, there was a wide range of entertainment programmes for athletes and spectators.
NUSSLI builds a complete stadium each year for the shows before and after the triathlon, and for the finish area itself. Called the Rother Triathlon Park, it houses 3,000 seats for spectators and the media, a stage, a big screen, sound, light, and camera towers, and a catering area.
This is where shows, concerts, and prize presentations take place. It is also the athletes' final goal. Last year, there were a thousand participants and more than a quarter of a million enthusiastic fans.

This article, written by Nussli, appeared in the Spring 2016 issue of Host City magazine.