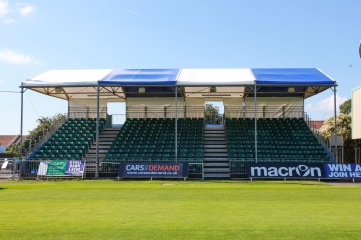 Bristol Rovers’ Memorial Stadium has an expanded capacity with two new look stands designed and installed by Arena Seating for the 2016/17 season.

The use of Arena’s demountable, or semi-permanent, seating systems meant the Club’s upgrades could be achieved quickly and economically.

Following consecutive promotions from Conference Premiership and League 2, the club was taken over by the Al Qadi family in February this year, and has since enjoyed an impressive third promotion into League 1. With the team performing well on the pitch the demand for tickets is up and the new owners have invested in upgrading the aging ground.

In line with advice from the local City Council and the Safety Advisory Group, the club took the decision to lower the control room at the cost of about £10,000 to the football club, enabling a 20 per cent increase in capacity.

“I have dealt with Arena Seating for 18 years, so there is a lot of trust and understanding between us. Their director Bradley Merchant is absolutely superb for this football club, he has always looked after us,” said Ian Holtby, Stadium General Manager.

“Arena have always made themselves available, given fantastic service and been a professional company from start to finish.”

Arena Seating’s in-house CAD design and structural engineering teams combined to ensure the plans were fully approved by the clients and local licensing authorities before the South Stand was totally refurbished and given a 20 per cent expansion in capacity from 850 to 1,056 seats. On the adjacent corner a smaller South West Stand was also installed by Arena, adding 360 seats and taking the ground’s capacity to 12,300.

Success on the pitch means Bristol Rovers has the opportunity to accommodate increased demand.

“Let’s be honest, this is an old, antiquated stadium, so Arena have once again been a very valuable part in upgrading the facilities we can offer,” said Holtby.

“We have also got 18 executive boxes and we have sold all of those, the new owners are probably spending in the region of another £100,000 to make good those facilities.

“With the new stadium plans well underway we are only planning on being here for two years all being well, and obviously we need to maximise the facilities we have, not just on a normal Rovers match day but also non-match day for conferences, meetings, weddings, banquets – that’s what we are looking to achieve. Fingers crossed we get there!”