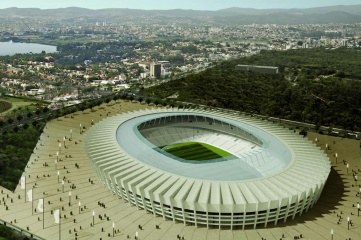 US$300m has been spent on rebuilding Mineirao Stadium

A seasonal storm in the World Cup host city of Belo Horizonte damaged the Mineirao stadium over the weekend, Xinhua news agency reports.

Parts of the roof flew onto the pitch of the recently rebuilt stadium in Belo Horizonte just before a state championship match on Saturday.

Mineirao will host six matches during the 2014 FIFA World Cup and US$300 million have been spent on redeveloping the stadium.

Video footage published by Brazilian newspaper Folha de S. Paulo showed three metallic plates landing onto the pitch less than one hour before the match, according to Xinhua.

Such storms are not unusual at this time of year, according to a weather institute in the state of Minas Gerais. More than 10cm of rain had fallen in three hours, with winds of up to 36km per hour.

The manager of Cruziero football team, which played on Saturday’s match, complained of the standard of the pitch. According to Xinhua, he said "Questions have to be asked. Is this pitch up to FIFA standard? I think the quality needs to be better.”

Host City invited the Belo Horizonte World Cup Organising Committee to comment on the incident at Mineirao but has yet to receive a response.

FIFA Secretary General Jerome Valcke voiced concerns about the readiness of World Cup venues at a press conference at FIFA’s headquarters in Zurich on Saturday.

"We are almost at 100 days before the first game starts in a stadium in Sao Paulo which is still not ready and won't be ready until May 15. And as you know another two stadiums [in Curitiba and Manaus] are quite late.

"For sure, the stadiums are beautiful but now it is a challenge for the organisers. And that is not a criticism. It is just a challenge. We have to find the solutions."