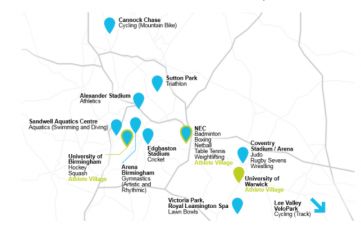 The decision to move away from the single site athletes’ village in the Perry Barr area of the city has been made by the Games Partnership with just under two years to go, after reviewing the impact of the global health pandemic.  It follows an assessment by the project delivery team, who has been working with the construction supply chain, as well as independent experts, on how they could de-risk Games delivery. With a shorter than normal timeframe for delivery of the Birmingham 2022 Games, the new build accommodation site was under continued review from the outset, with expert consultation throughout, and had very little scope to withstand the impact COVID-19 has had on construction.

The Perry Barr Regeneration Scheme, with new housing and transport infrastructure, will still be delivered.  This council-led residential scheme has been accelerated due to the Birmingham 2022 Commonwealth Games and has been made possible with additional investment from central government.

The new three-site campus model for Birmingham 2022 athlete accommodation will be delivered within the overall Games budget of £778 million, with the Games remaining on track to be delivered on time and on budget.

The decision to move to three campus villages across the West Midlands has the support of  athlete representatives and Commonwealth Games Associations across the world who have been told of the new plans.

Ian Reid, CEO of Birmingham 2022 said: “These are challenging times for all of us and delivering a major multi sports event during this period has meant we have needed to collaborate effectively, be pragmatic to change, and remain realistic about the challenges we face.

We recognise that this new model is a move away from the historic norm and we are grateful for the support shown by our partners across the Commonwealth Games Associations.

Birmingham and the West Midlands is extremely fortunate to have superb alternate facilities and we are making this decision now, with two years to go, to de-risk the project, ensure delivery for athletes and teams and secure the legacy of new housing and transport infrastructure in Perry Barr.

This is the sensible and pragmatic thing to do for the Games, the athletes and for the people of Birmingham. It enables Birmingham City Council to focus on the delivery of the Perry Barr Regeneration Scheme and gives us enough time to plan essential Games services like transport and security. Furthermore, it offers athletes and teams the assurance of a warm welcome and a superb Games experience in their homes-from-home across the West Midlands”.

Alistair Brownlee, Commonwealth Games England’s nominee and vice-chair of the Birmingham 2022 Athlete Advisory Committee said: “Making this decision with just under two years to go until the Games, means there is early clarity for team officials and athletes about where they will be staying during Birmingham 2022. As an athlete, we want to know that there are certain aspects of events that are guaranteed – accommodation is one of them.  This early decision, during uncertain times, provides reassurance to athletes as they prepare to compete at their best in Birmingham.”

Craig Phillips, Chief Executive Officer, of Commonwealth Games Australia said: “While a single Games Village is the norm, we know these aren’t normal times and accept that, despite the best of efforts by the B2022 Organising Committee, this will not be possible for Birmingham.

“Commonwealth Games Australia thanks the B2022 Organising Committee for their openness in sharing the changes to the Games Village solution.  We will remain flexible in our planning to ensure we achieve our two overriding objectives for the Games – that our athletes are able to achieve their best possible performances, and they have the best possible Games experience.  This remains our focus.”