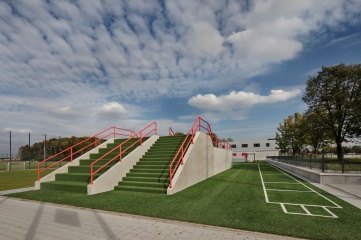 Talented young players at FC Bayern Munich climb up the fitness hill on premium synthetic turf – only the steps consist of LigaGrass Pro, a sand-filled all-round system with crimped stalks

A 70 million euro state-of-the-art football academy has been built on the site of a former barracks within sight of the Allianz Arena in the north of Munich. Polytan was in on the action as the fitter of choice: the Burgheim-based sports surface specialist laid around 22,000 square metres of synthetic turf and synthetic surfaces outside – with 20,000 square metres consisting of the LigaTurf RS Pro II CoolPlus premium synthetic turf system with top quality Infill Bionic Fibre infill granules.

Great importance is attached to the development of young talent in Munich: the ultra-modern sports facilities on the club's 30-hectare site include a sports hall, a ground with three stands for 2,500 spectators, a basketball court, a beach soccer pitch, fitness/technique/coordination areas, mini pitches, a circular track and seven full-size pitches. This unique offering is rounded off by the academy for 35 talented junior players, the club house, a cafeteria, a medical practice and much more besides.

At the request of the German record-holders, sports surface systems from Polytan were installed over an area of around 22,000 square metres on the open-air site, with synthetic turf from Polytan being laid on two full-size pitches, two mini pitches and the fitness/technique/coordination area. In addition, Polytan synthetic surfaces were the ideal choice for the basketball court and the circular track: the basketball court was fitted out with the hard-wearing PolyPlay S all-round surface, while the Rekortan M professional sports surfacing system ensures that the running track is suitable for competitions. Both areas have been laid in classic brick red, the usual colour of choice in professional facilities used for competitive events.

Polytan had already been awarded the contract for the synthetic pitches at the training ground on Säbener Strasse by the German record-holders back in 2009 and 2011. Thomas Hanke, the Sales Director for Germany at Poly- tan, attributes the fact that the club has again opted for premium products by the Burgheim-based sports surface specialist to the continuous advances in its systems.

"In combination with the elastic base layer, which provides for long-lasting, optimum force reduction, the LigaTurf RS Pro II CoolPlus synthetic turf system is ideal for the high demands placed on it by FC Bayern Munich. The highly resilient smooth filaments are similar to real blades of grass and yet they provide consistently good playing qualities, even when the weather is cold and wet. There is no need to close the pitches, and the turf heating system means that training sessions can run continuously, even if temperatures fall below freezing or there is a bit of snow."

The state-of-the-art Infill Bionic Fibre granules contribute to even better playing qualities and help to reduce the risk of injury to players. The EPDM granules are of an irregular shape, in contrast to the angular, smooth-cut form of conventional infill. The result is a softer and naturally springy surface.

Thomas Hanke emphasises yet another advantage: "The organic structure of the infill granules reduces what is known as ‘splash’, when material sprays up in other words, and duelling and tackling are possible to almost the same extent as on real grass."

Furthermore, stalks of grass in two shades of green and the green infill granules give the turf a fresh, natural look which lasts all year round. The playing field is prevented from heating up excessively on hot summer days by Polytan's patented CoolPlus technology, which incorporates UV-reflective pigments into the filaments.