Back to the future: designing for the main event and beyond - Host City News

Home
»
News
»
Back to the future: designing for the main event and beyond 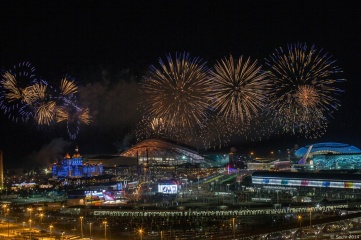 The Fisht Olympic Stadium in ceremony mode - the venue is now being reconfigured for the 2018 World Cup (Photo: Populous)

At the recent Olympic Winter Games in Sochi, the opening and closing ceremonies dazzled audiences around the world. Spectacular, theatrical and hugely sophisticated, they exemplified the fact that, although a competition may have several venues, the main stadium remains the focal point of every major event. But how can a stadium meet the huge technical demands of these events, and their capacity criteria, while still being able to adapt for a long-term legacy once the main event has finished?

The solution lies in the integration of the permanent and temporary. It’s only by including temporary structures and seating in the initial design that buildings gain the flexibility they need to adapt to a changing set of needs. In Sochi, for example, we incorporated temporary seating that will allow the Olympic Stadium to expand to accommodate the 45,000 seats required for the 2018 FIFA World Cup, before reducing to a final legacy capacity of 25,000 for the local football team.

Similarly, the Incheon Stadium, which will host the 2014 Asian Games, is a 70,000 seat stadium that will reduce to 30,000 seats, thanks to our design that has one permanent seating stand and three temporary ones, destined to become park landscaping for the city’s residents and visitors to enjoy once the temporary structures are removed.

This flexible approach has its roots in Populous’ design for Sydney’s Olympic Stadium, now the ANZ stadium, where an initial capacity of 110,000 seats was reduced to 83,000 after the Games by removing the end stands and reconfiguring the roof. By the London Olympics in 2012, our thinking had evolved to focus on design as a whole, rather than construction. We broke the Stadium down into its constituent parts to explore how a building could be planned from the outset to transform itself and be fit for a long-term legacy – and the result is a multi-purpose Stadium of 60,000 seats (reduced from an Olympic capacity of 80,000) that is capable of hosting IRB World Cup Rugby and Premier League football as well as concerts and other events.

Designing in this way has inherent challenges: namely, ensuring that at each stage of its evolution the building has architectural merit – during the event itself, when the focus of the world’s media is on the stadium; and afterwards, when visitors and residents must appreciate and use it as part of the city’s fabric. In addition, although the end goal of the design is the same – to reduce in scale after the main event – this can’t be achieved by a ‘one size fits all’ approach. Each stadium has unique requirements and these must be reflected in innovative design solutions.

At Populous, our understanding of a stadium’s cultural significance means that we’re constantly devising innovative ways to balance the cultural and technical needs of the main event with the social responsibility of designing buildings that have a long-term legacy. It’s a journey that, for us, began in Sydney in 2000 and will, we are sure, continue to challenge and fascinate far into this century and beyond.