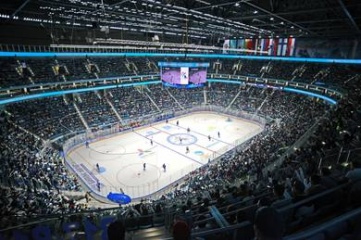 The home team won 4-2 in the first ever match in the New Ice Arena (Photo: hcbarys.kz)

The 12,000-seat New Ice Arena in Astana could co-host a world championship with Almaty, IIHF president Rene Fasel has suggested

Sports infrastructure in Kazakhstan took a major step forward on Sunday with the opening of a new 12,000-seat ice hockey venue in the capital of Astana – which could be used to jointly host an IIHF World Championships.

Asked by news agency Kazinform about the possibility of Astana hosting a World Championships, International Ice Hockey Federation (IHHF) president Rene Fasel said “It would be great. Why not?

“This is a great arena and it has the right atmosphere. 12 thousand seats, it is just an ideal capacity.

“There is also a great arena in Almaty, we could organize the world championship in two cities. This is a good idea.”

A 12,000-seat Ice Arena is currently under construction in Kazakhstan’s largest city, Almaty, which will include two ice sheets and a swimming pool.

The Almaty Ice Arena, which formed part of the city’s bid to host the 2022 Winter Olympic Games, will be used for the 2017 Winter University Games (Universiade).

At 12,000 seats, Astana’s New Ice Arena is twice the capacity of any existing ice rink in the Central Asian former Soviet republic. It replaces the Sports Palace Kazakhstan, which the IIHF says was among the worst rated in the Russian-based cross-border Kontinental Hockey League (KHL).

With an academy and swimming-pool complex, the venue will play a role in Kazakhstan’s wider ambitions for sports development.

The opening was marked by a showpiece face-off between Rene Fasel and Kazakhstan Ice Hockey Federation president Askar Mamin before a game between Barys Astana and Metallurg Novokuznetsk kicked off the pre-season.

“I congratulate you and all the ice hockey fans of Astana and Kazakhstan on having this new arena. The ice is among the best around Europe,” Fasel told Kazinform.

“I like this country a lot, and this is not my first trip here. People in Kazakhstan are very friendly and hostpitable."