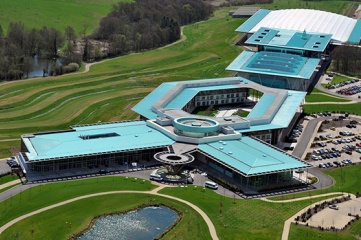 The English Football Association has contracted Arena Seating to supply 500 demountable seats to the national football centre, St George’s Park, it was announced today at Soccerex Global Convention in Manchester

Five uncovered demountable grandstands, consisting of four tiers each, will be located along a covered, elevated walkway overlooking the elite training pitch and reconfigured as required by the venue’s event programme.

Speaking at Soccerex Global Convention in Manchester, Dave Withey, Arena UK & Europe’s sales and marketing director, said: “It will essentially be a permanent installation to begin with, but the modular nature of the system means that the grandstands can quickly and easily be reconfigured and moved elsewhere when needed; such as the indoor Futsal hall or any of the 12 outdoor pitches.

“St George’s Park hosts a variety of different events, in various locations across the site, so the ability to do this was a vital part of the FA’s brief. They can then be moved back to the elite training pitch, negating the need for any additional storage facilities.”

The grandstands will be installed on the 15th October by six crew in a single day. Arena Seating will train St George’s Park on how to reconfigure and extend the grandstand for larger events, using Arena’s rental stock.

“There is no need for permanent construction work, making it extremely cost effective,” said Withey. “This is achieved without compromising on spectator comfort and viewing angles, which is very important for a world class facility like this.”

St George’s Park, based in Burton-upon-Trent in Staffordshire, is the preparation ground for all of the England national football teams and home to the FA’s coaching and development work.

Arena Group is exhibiting at Soccerex Global Convention at stand 219. The company will also be exhibiting at HOST CITY: BID TO WIN conference, which takes place in London on 28th October 2014. For more information visit www.bidtowin-hostcity.net