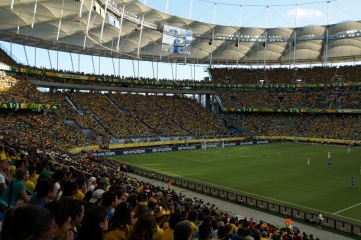 A company that provided took its temporary seating solutions from London 2012 to the Brazil 2014 World Cup is one of the UK’s top exporters, according to research conducted by Richard Branson’s Fast Track agency for the Sunday Times.

Arena Group began showcasing its innovative temporary seating systems in HOST CITY magazine in the run-up to London 2012, where it built the Populous-designed beach volleyball arena and provided seating for the weightlifting, boxing, fencing, table tennis and judo events.

“The ranking is testament to the vision that we’ve had for the company since long before the London 2012 Olympics; to become a trusted, global provider of event overlay services and the highest quality temporary event infrastructure,” said Greg Lawless, CEO of Arena Group.

“This international growth has been a fundamental part of the group’s strategic plan, and we have made acquisitions which have positioned us to secure contracts for the next generation of major international sporting events.”

HOST CITY has been profiling London 2012’s quiet revolution in the temporary overlay for many years, through interviews with the organising committee and its key suppliers in this area, including Arena Group and Populous.

“We would like to congratulate Arena Group on making the upper reaches of the International Track 200,”said Ben Avison, editor of HOST CITY magazine.

“It has been gratifying to see these temporary seating solutions being taken up by the organisers of the 2014 World Cup and we look forward to seeing this positive trend continue in future sustainable mega events.”