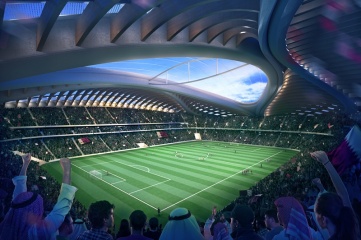 The Supreme Committee for Delivery & Legacy has awarded HBK Contracting Company the enabling works contract for Al Wakrah stadium, the first proposed host venue to be delivered ahead of the 2022 FIFA World Cup.

The contract was awarded through a tender process designed to attract Qatari contractors with local knowledge and proven capability in delivering the required services, as part of the Supreme Committee’s legacy initiative to develop the private sector.

The enabling works phase begins in May and is due for completion by around March 2015. During this period, HBK will deliver bulk earthworks including site clearance, excavation and disposal, fill, as well as underground services and stadium foundations. The foundation works will be marked by a ceremony in September.

The main construction company for the stadium will be announced at the end of 2014. The successful candidate for this tender will partner with a local business, in line with the Supreme Committee’s effort to boost the expansion of the Qatar economy.

“We are excited to announce the next stage of works for Al Wakrah Stadium and look forward to continued progress on the ground this year,” said Hassan Al Thawadi, Secretary General of the Supreme Committee for Delivery & Legacy. “The stadium and surrounding precinct will leave a social legacy in Al Wakrah and by appointing HBK, a Qatari company, we aim to also contribute to the economic legacy of the FIFA World Cup in Qatar.”

H.E. Sheikh Ali Bin Hamad K. Al-Thani, President of HBK, said: “We are honoured and excited to be appointed by the Supreme Committee as the contractor for this critical first phase of works on the road to the FIFA World Cup in 2022, and look forward to working closely with all stakeholders to help build the first World Cup in the Middle East and achieve our country’s ambitions.  We thank the Supreme Committee for giving us this opportunity to be involved in this most celebrated journey.”

The 40,000-seat stadium, future home of Al Wakrah Sports Club, was the first of Qatar’s FIFA World Cup proposed venues to be revealed. The stadium will be surrounded by approximately 560,000 m2 (60-hectare) of legacy precinct with a new sports centre and community hub. The precinct will deliver a range of community facilities, including a park, mosque, school, hotel, wedding hall, vocational training centre and retail outlets.

Following the tournament, the stadium’s capacity will be reduced to 20,000 with the extra modular seats removed, re-configured and donated to countries in need of sporting infrastructure, in consultation with FIFA and the continental football confederations.

After an initial inspection during the tendering process of the facility where the HBK workers on the Al Wakrah project will be housed, HBK confirmed their commitment to adhere to the Supreme Committee's Workers’ Welfare Standards, working closely with representatives of the Workers’ Welfare Committee to ensure that the health, safety and dignity of workers on the project are further protected.

Farah Al-Muftah, Chairwoman of the Workers’ Welfare Committee, said: “We started a dialogue with HBK on our expectation for workers welfare during the tendering process and we are encouraged by the company’s commitment to creating a healthy and safe environment for workers on the Al Wakrah Stadium project.”