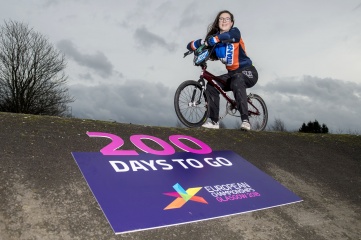 The biggest sporting event to be staged in Scotland since the Commonwealth Games, the first ever European Championships, gained momentum with a 200 day to go celebration on Sunday 14 January 2018.

Taking place from 2 to 12 August, Glasgow 2018 will see around 3,000 athletes compete in six sports at 12 venues across Scotland. The new multisport event is set to celebrate the country’s young talent and achievers coinciding with the Year of Young People.

During a significant year for sport, 12 venues across Scotland will host 84 sessions across six different sports - Aquatics, Cycling, Golf, Gymnastics, Rowing and Triathlon.

Six ambitious young athletes, representing each of the sports, are looking forward to the spectacular and hope that the profile of Glasgow 2018 will help inspire more young people to get involved in sports.

The rising stars whose sporting ambitions are set to reach new heights in 2018 include 18-year-old Glaswegian BMX racer Mia Paton (pictured) who will benefit from the new Olympic-standard BMX track being built at Knightswood Park, which will host Europe’s best racers during the Championships.

Fraser Lynes, a 14-year-old gymnast from East Ayrshire who studies and trains at Glasgow School of Sport already has a collection of medals to his name, having represented Scotland in the sport several times, and says the Glasgow 2018 action at the SSE Hydro will help encourage more people into gymnastics and demonstrate the benefits of sport.

Troon golfing talent Hazel MacGarvie, 19-year-old University of Edinburgh rower Josh Armstrong, 13-year-old diver Danny Mabbott and 18-year old triathlete Iona Miller from Inverclyde are also full of anticipation for Glasgow 2018 and the momentum it will build within each of their sports.

Cabinet Secretary for Culture, Tourism and External Affairs, Fiona Hyslop said: “2018 marks a milestone year for Scotland. In just 200 days we will make sporting history on the global stage when we host the first ever European Championships and in Scotland’s Year of Young People, celebrate the outstanding spirit and contribution of our young people. The feats of sporting skill and the cultural brilliance showcased at the Championships will inspire the whole country and allow Scotland and its young people to shine on the world stage.”

Leader of Glasgow City Council, Councillor Susan Aitken, said: “The Glasgow 2018 European Championships promises to be a fantastic platform to inspire, engage and celebrate young people – from sports fans and athletes to artists, performers and volunteers. In 200 days Glasgow and Scotland will come alive with an unforgettable display of sport and culture that is a must-attend, must-watch event for 2018.”

To be staged every four years, the European Championships will be an 11-day celebration of world-class sport and produce a packed 10-day broadcast schedule, with audiences of up to 1.03 billion.