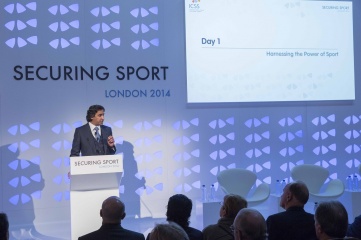 At an off-limits meeting on the sidelines of the ICSS’ Securing Sport conference in London, sports ministers from around the world resolved to take action to save the integrity of sport

At Securing Sport 2014 on Monday, the International Centre for Sports Security (ICSS) hosted a special closed doors meeting attended by sports ministers and leaders of international organisations, who agreed to take steps to prevent the growing threat of corruption in sports.

The ICSS also announced a partnership with UNESCO the United Nations Educational, Scientific and Cultural Organization (UNESCO) to safeguard sport against the “unprecedented threat” from corruption, match-fixing and sport betting fraud.

Ministers at the private meeting came from Portugal, Singapore, Cape Verde and Angola, joined by representatives of UNESCO, the Council of Europe, WADA, Commonwealth Secretariat and OECD.

The participants agreed on the importance of following up on and implementing international conventions and instruments such as the Declaration of Berlin and the Council of Europe’s Convention on the Manipulation of Sports Competitions.

“Sport is now under threat in a way unprecedented in its history and the response to these threats must be united, international, and bold,” said ICSS president Mohammed Hanzab.

“This special ministerial forum was another important step in engaging key countries and regions, international experts and sport ministers and ensuring that protecting the integrity of sport continues to stay high on the agenda.

“Securing Sport 2014 has today gathered individuals with the power, will, and determination to see that international sport moves in the right direction in the future.”

According to the ICSS, the ministerial meeting highlighted a desire to implement education programs and capacity building initiatives, to support countries and regions to assist them in creating national integrity platforms, and to work together to create programmes to preserve the integrity of sport.

Under the agreement with UNESCO, ICSS will host around around 100 government officials, technical experts and leaders in sport at a “special technical meeting” in Doha in the first half of 2015. This will be the first time international experts have met to implement the detailed recommendations on the manipulation of sport competitions outlined within the ‘Declaration of Berlin’.

“This meeting of international experts will play an important part in the ICSS’s drive to mobilise international efforts and enhance the integrity and credibility of sport,” said Hanzab.

Hailed as a ‘beacon for future national and international sports policy’, the Declaration of Berlin was adopted by 600 participants from 121 countries at the 5th UNESCO World Sport Ministers Conference (MINEPS V) in May 2013. It seeks to improve and enhance international cooperation between governments and all other sport stakeholders on issues of access, investment and integrity of sport.

In particular, the Declaration of Berlin calls for better sports governance and a zero-tolerance policy against doping and the manipulation of sports competitions, as well as greater collaboration to detect, prevent and monitor such manipulation.

“We are all custodians of sport and we owe it to every athlete and sport fan to protect its integrity and credibility so we can nurture the next generation of sports leaders,” said Hanzab.