World Expo exclusive: A stage for all the world - Host City News

Home
»
News
»
World Expo exclusive: A stage for all the world 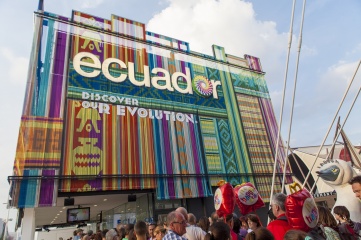 Exhibiting nations, like Ecuador at Milan 2015, have the opportunity to market themselves to an international audience at a World Expo (Photo Credit: Goran Bogicevic / Shutterstock)

Hosting a World Expo requires space, investment and a long term development plan. Get the mix right and it’s a platform to reach the world, says Dimitri Kerkentzes, chief of staff at the International Expositions Bureau (BIE)

To say that hosting a World or International Expo is a major undertaking would be an understatement of the biggest order.

The World Expo Milan 2015, which is running from 1 May through to the end of October, covers a site of 100 hectares with 145 countries participating.

Exhibiting nations install themselves on an Expo site up to a year in advance to build their pavilions, which can take up to a year after the Expo to dismantle.

“Even in the case of a smaller International Expo, we are talking about hosting people for a minimum of six to eight months. So this is quite a feat.”

Undeterred by the scale of the project, cities from all over the world continue to vie for the hosting rights. The Kazakh capital Astana is hosting the 2017 International Expo, for which the Belgian city of Liege also applied.

Hosting an event on this scale is a rare opportunity to reaching the global public.

“Whatever the major event is, whether it be cultural or sporting, it’s for them an opening up to the world.

“It’s the president’s point of view that Kazakhstan should be one of the world’s top 30 developed countries within the coming years. And this is an opportunity for them to show what they can accomplish and what they have accomplished.

“You’ve seen a lot of developing countries deciding that they want to invite the world to be present in their cities and it’s one of the best ways for them to achieve this.”

Dubai won the right to host the 2020 World Expo, rising above competition from Izmir in Turkey, Yekaterinburg in Russia and Sao Paulo in Brazil.

Already an international city renowned for as a hub for business, Dubai sees the World Expo as an opportunity to project a new image to the world.

“They are a very particular case where a country, which is basically a desert country, has to be able to deal with modern infrastructure and living requirements – and this is one of the key points where they are trying to brand themselves with the Expo; it’s how not only are they a hub, but they are a sustainable hub.”

Dubai is aiming to attract at least 20 million visitors in 2020 but, says Kerkentzes, achieving this will requires about 70 per cent of visitors to come from overseas.

By way of contrast, the 2010 World Expo in Shanghai attracted 73 million visitors in six months, just seven to eight per cent of whom were overseas visitors.

“The true meaning of an Expo is that the messages and the education is for the global public, not limited to one subsection of global citizens.

“And then you have to be realistic – there are certain Expos where you may have more foreign visitors than you do locals.”

Astana has less than a million inhabitants in a country with a population of around 18 million. “What we expect to see there is – apart from the usual Expo lovers that travel from all over the world – citizens of Kazakhstan and also the neighbouring countries.”

Milan is on course to hit its target of 20 million visitors and the event is attracting other global cities to bid for future Expos, Kerkentzes says.

“Proof of the fact that the World Expo is useful even in an economic powerhouse of a city like Milan is the fact that for 2025 we already have interest from Paris, from London, from Rotterdam, from Osaka and Johannesburg – so it shows that the case that Milan has been looked at by major European and world cities and they want to perhaps try and do the same themselves in 2025.”

The UK government has said that it will bid but has not yet said which city it will put forward to bid in 2016. The BIE has been contacted by several UK cities.

“The UK showed how good an Olympic Games could be for a city. London is one of the most famous capitals in the world, so why not try and brand other UK cities as well and use an Expo to do it? It’s very logical and it’s something the government will have to take into close consideration and make a final decision on next year.”

Similarly, other cities in France are interested in getting involved in an Expo bid. “It would have to be the government that would decide which would be the bidding cities.”

US cities such as Houston and Silicon Valley have also expressed an interest in hosting an Expo, but as the national government has not paid its BIE membership since 2001 it would need to be successfully lobbied before any bid could be lodged.

“There is a very strong pressure from Minnesota to bid for Expo 2023 and they are working on trying to get the government to re-join the BIE,” says Kerkentzes.

The Canadian government also withdrew from the BIE in 2012. “Canada hosted many Expos in the past and has always participated in Expos. I know that there is very keen interest from the new Mayor to maybe bid for 2025, but he has to work on the internal politics on bringing Canada back.”

The cities expressing an interest in hosting the 2025 World Expo are largely developed, western world cities.

“If you were to receive only developing cities or developing countries, people could criticise, saying Expos are no longer for developed countries and global cities like New York, London and Paris. There are always improvements that can be made in a city and I think an Expo can always help in that.”

Cities can submit a bid for a world Expo nine years before the proposed opening date of the next Expo. The BIE expects bids for 2025 to start arriving in the first and second quarter of 2016, with the voting for the event set to take place either at the end of 2017 or mid-2018.

The bids will be judged on a number of criteria – not just the theme.

“From the BIE, to ensure that Expos remain very high value for the candidates and the hosts, we have to make sure that there are positive impacts from all sides.

“Theme is of course primordial in an Expo; it has to be something of global interest, but we have to make sure all the other points are properly looked at and taken care of.”

“The location is key as well, to make sure that people can get there, that it’s an interesting place to visit and that it can attract tourism that it requires.”

But just as the International Olympic Committee has increased its emphasis on the sustainability and legacy benefit of hosting the Games through its Agenda 2020 programme of reform, the BIE places great emphasis on how hosting an Expo can boost a city’s development plans.

“I think it’s important to remember that the infrastructure that’s built around these events is not purely for the event itself; it’s infrastructure that's already foreseen in the development of the city and the country. And whether it’s an Expo, an Olympics or the World Cup, this is just a catalyst to get it done quicker.

“Lessons have been learned. All the organisations responsible for these different mega events are putting them into action now and making sure that, no matter which type of event a city goes for, it will be of benefit to the world but also to the country and the city that’s hosting it.”

With this in mind, the potential rewards of hosting an Expo are great, Kerkentzes says.

“Usually you see from reports after an Expo that the participating countries found the investment has been well spent; that the amount of communication and branding for their own country abroad has helped growth in tourism and in sales.”

Dimitri Kerkentzes is to speak at HOST CITY 2015 on 9th and 10th November on the subject of “How Cities and Events Innovate to Thrive”.