Home
»
News
»
Will the marvellous city live up to its name? 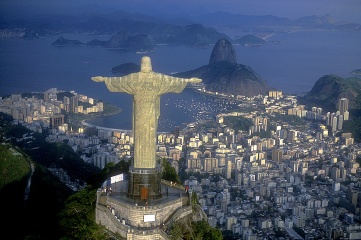 What does Rio need to do to deliver on its promise of a great Games, and what has the city learned from hosting the World Cup?

Rio de Janeiro staged seven 2014 World Cup matches including the final, but the spotlight will shine even more brightly on the ‘Cidade Maravilhosa’ when it hosts the Olympic Games in 2016.

Brazil had to overcome delays and doubts before staging a World Cup now destined to be remembered as more successful for the host nation off the pitch than on it.

Now Rio is under pressure after International Olympic Committee (IOC) vice-president John Coates branded its preparations the “worst ever” in April.

The city of Sugarloaf Mountain and Christ the Redeemer promises a spectacular setting but also has a reputation for traffic jams and violent crime.

So, did football’s showpiece event leave a legacy for the first Olympics in South America and what challenges remain?

The renovated 78,838-seater Maracanã Stadium will be used for the opening and closing ceremonies of the Olympics and Paralympics and football matches, including both the men’s and women’s finals.

The Games will take place across four venue clusters:

•The Olympic Park in Barra da Tijuca (widely known as Barra) will host around 60 per cent of events, including track cycling, boxing, tennis, basketball and swimming, and feature the broadcast and press centres. Construction work at the site has recently been extended to 24 hours per day and work on three halls hosting indoor sports only began in August. Work on athletes’ housing in the Olympic Village is more advanced – with 31 17-storey towers already standing – and should be finished by the end of 2015.

•Deodoro, the next biggest cluster, will host 11 events, including equestrian, shooting and rugby sevens, across nine venues in a poor area of Rio. Three venues used in the 2007 Pan-American Games and 2011 World Military Games just need renovations. However, work on a new arena, hockey centre, BMX centre and whitewater stadium only began in July after the IOC warned Deodoro was two years behind schedule and questioned Rio’s social legacy planning. Two temporary structures will also be created – the Rugby and Modern Pentathlon Arena and the Olympic Mountain Bike Park.

•The Maracanã cluster. As well as the football stadium, this includes the João Havelange Olympic Stadium that was built in 2007 for the Pan American Games and will host the athletics. Currently undergoing roof repairs, it is due to close again next year so the capacity can be raised from 45,000 to 60,000.

•Copacabana cluster. A temporary 12,000-seater stadium on Copacabana beach will host beach volleyball. In Flamengo Park, 3,800 spectators in temporary seating will be able to see road cycling and race walking. Nearby, Guanabara Bay will host the sailing, while a temporary 10,000-seat pontoon in Rodrigo de Freitas lagoon will ensure a great atmosphere at the rowing and canoeing finish zone.

World Cup match ticket-holders were allowed to take the underground to the Maracanã for free and the municipal government declared public holidays for Rio’s three weekday games.

While the arrangements allowed fans to travel without problems, critics say the city came to a halt – something Rio cannot afford over 17 days of the Olympics.

“It appears from the outside that the city functioned well but it was not working as normal,” said Christopher Gaffney, a visiting professor of architecture and urbanism at the Federal University of Niteroi.

The Olympic clusters are considerable distances apart and traffic leaving Rio’s beach zones often slows to a crawl around tunnels through the mountains.

Barra is about 25km west of central Rio, the Maracanã is 13km north of Copacabana and Ipanema, while Deodoro is still more distant from tourist hotspots and hotels.

The first 56km BRT opened in 2012 and the 39km Transcarioca began operating in June – along with a new international airport departures area – and is expected to carry 320,000 people daily and cut journey times by 60 per cent.

The 26km Transolímpica, due to open in January 2016, will link the competition centres in Barra and Deodoro and is expected to be used by 400,000 people per day.

Finally, the 32km Transbrasil will connect Deodoro to central Rio and could benefit 900,000 passengers daily. However, Transbrasil’s tender date has been delayed and although work could begin in October, transport experts question whether it will be ready for the Games.

The underground’s Linha 4, due to open early in 2016, will have six new stations linking Ipanema to Barra, and should carry more than 300,000 people daily.

The Ministry of Justice’s Extraordinary Secretariat for the Security of Big Events (SESGE) co-ordinated arrangements for the World Cup and will do so for the Olympics too.

Police averted the threat of large protests close to World Cup venues by establishing security perimeters 2km around the stadium.

The tactic was condemned by civil rights groups and failed to prevent nearly 100 ticketless Chile fans breaking into the Maracanã ahead of a game against Spain.

Police also used tear gas and batons against some demonstrators close to the cordon on the day of the final but the Brazilian government views World Cup security as a success given the fears of greater unrest.

Central to security planning has been the establishment of Police Pacification Units (UPPs) since 2008 in favelas previously controlled by drugs gangs.

Around 40 UPPs are now in operation with nearly 10,000 Military Police officers. At least two helicopters will transmit real-time video to a co-ordination centre in Deodoro during the Olympics.

Dignitaries will be driven to events in a fleet of 36 armoured police sports utility vehicles with sirens and GPS systems.

The threat of terrorism is considered low and there are no signs that major political protests are likely, but the security demands for the Olympics are still far greater than on any World Cup city.

World Cup final day saw a record 25,787 security personnel deployed on Rio’s streets but Andrei Rodrigues, special secretary for security and safety at major events, says “several times” that figure will be called upon during the Olympics.

This article was written by Robin Yapp, HOST CITY’s reporter in Brazil, and was first published in the Autumn issue of HOST CITY magazine