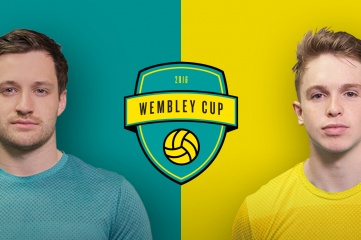 Football's leading YouTube content creators are to play with sports stars in front of 30,000 interacting fans at the Wembley Cup final on 2 September

The Wembley Cup final, which took place for the first time last year in Wembley Stadium as a match between leading YouTube football content creators, is to be open to the public in 2016 – and the live event will now feature football legends.
The Wembley Cup is a YouTube series launched by Wembley partners EE in 2015, featuring the leading online video channel’s top “vloggers”.
From August this year, the eight-part series will document the journey of YouTube phenomenon Spencer Owen (Spencer FC) and fellow YouTuber Joe Weller as they vie to build a team strong enough to take the title, competing in a series of tough and entertaining physical challenges in the build-up to the final on 2 September.
This year, for the first time, fans will be able to buy tickets to the live final at Wembley stadium with over 30,000 tickets on sale.
The profile of the series has been raised further still by the inclusion of six EA SPORTS FIFA Legends who will push the YouTubers to their sporting limits during the episodes and play in the final match.
England football legend Robbie Fowler and former French international midfielder Robert Pirès are the first names confirmed to be taking part.
At the final, EE will be making this year’s competition the most immersive yet by placing the power firmly in the hands of audience in the stadium. Fans attending will be able to shape the teams and make decisions through social media.
“Following on from the incredible reaction to last year's Wembley Cup, we’re super excited to be bringing it back with EE,” said Spencer Owen, founder of YouTube channel Spencer FC.
“Our challenge this time around was to make it even bigger and better than in 2015.  We feel that with the amazing football and YouTube talent we have on-board – culminating in a live final with a proper crowd at Wembley – it’s going to make for a very entertaining series.”
Max Taylor, MD of digital, comms and innovation at EE said: “With over 30 million views amassed for last year’s Wembley Cup, the challenge for 2016 was to make it even bigger and better and with over 30,000 tickets going on sale today for the live final, we are inviting our customers and football fans down to the event for the first time.
“The Wembley Cup has become a big part of how we activate our partnership with Wembley Stadium and we’re delighted to be supporting the stadium’s official charity partner, The Bobby Moore Fund.  The hugely popular YouTube series is also the perfect opportunity for us to bring to life our offer of six months free access to the BT Sport app for customers which launches later this month.”
esports are of growing important to FIFA, which stages an annual competition of football video games called the FIFA Interactive World Cup in partnership with EA SPORTS and Sony Computer Entertainment Europe.
James Salmon, Senior Product Marketing Manager for EA SPORTS FIFA in the UK said: “We’re delighted to be supporting The Wembley Cup and look forward to seeing how the FIFA Ultimate Team Legends get on against YouTube’s biggest stars.”