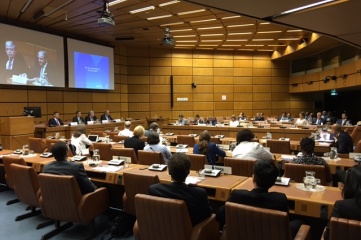 Sports, government and other international organizations have contributed to a resource guide to investigating corruption and crime in sports – an “underdeveloped” area of law enforcement

The United Nations Office on Drugs and Crime (ONODC) and the International Centre for Sports Security (ICSS) have launched a new resource guide to help law enforcement and sports organisations better detect and investigate match-fixing and cases of sports-results manipulation.

“The joy that sports bring to billions of fans around the world can so easily be marred by crooked practices such as match-fixing,” writes Yuri Fedotov, Executive Director of the UNODC in the foreword to the guide. “The best way to tackle these threats is through a multi stakeholder approach.”

The Resource Guide on Good Practices in the Investigation of Match-Fixing was launched on Tuesday alongside a meeting of the Open-ended Intergovernmental Working Group on the Prevention of Corruption, attended by representatives of the 178 States parties to the United Nations Convention against corruption.

“The problem of match-fixing is such that it undermines integrity in sport with the significant illicit profits it generates allowing organized crime and corruption to thrive,” John Brandolino, UNODC Director for Treaty Affairs said at the launch of the resource guide.

“In addition, the investigative skills of both law enforcement agencies and sports organizations around the world which are needed to identify and apprehend those responsible, are relatively underdeveloped.

“The Resource Guide represents UNODC’s and ICSS’s efforts to address this shortage in skill among investigators in both law enforcement and sports organizations and to raise awareness among policy makers about the threat of match-fixing. It serves as an important tool for those seeking to understand the problem and to learn how to effectively investigate it.”

More than 40 experts contributed to the development of the resource guide, including officials from FIFA, the International Olympic Committee, INTERPOL, the European Commission, Hong Kong Jockey Club, World Snooker, Council of Europe, Ministries of Justice from France and the Republic of Korea, and EUROPOL.

“This handbook provides a comprehensive range of case studies, investigation techniques and approaches to combat match-fixing as well as providing valuable guidance on how to disrupt the international organized crime syndicates that now operate in sport,” said Mohammed Hanzab, President of ICSS.

“As the ICSS looks to build on this launch and work alongside the UNODC to develop a series of workshops and training courses in this area, this handbook will hopefully provide sport federations and law enforcement agencies with an important go-to-guide to detecting, investigating and prosecuting match-fixers and organized crime.”

The full Resource Guide can be read and downloaded on the UNODC website.